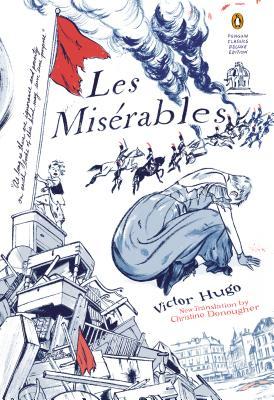 I’ll be honest, I’m a book cover whore. The new edition of this classic is outstanding and calling to my inner book cover obsession! I love the colorful and attractive cover which simply screams READ ME!

I am thrilled to be offering this PENGUIN CLASSICS DELUXE EDITION of the Victor Hugo novel, LES MISÉRABLES!  I am a huge fan of the film and soundtrack but haven’t actually read the book (but I will be next month!).

Thanks to the publisher I am thrilled to be able to offer a giveaway copy for your reading pleasure! Be sure to check out details about this edition at the end of the post here and be watching for my review of the book next month!

(GIVEAWAY OPEN TO US/CANADA ONLY AND NO PO BOX)

MORE ABOUT THE BOOK….

Victor Hugo’s LES MISÉRABLES has been a popular phenomenon since it was first published in 1862—most recently, award-winning screen and stage adaptations have held captive audiences worldwide. This year, Penguin Classics presents a deluxe edition of Christine Donougher’s compelling, contemporary new translation of the novel (the first new Penguin Classics translation in forty years), which highlights not only its emotional resonance and social observation, but also its quick wit and rich historical texture.  (Penguin Classics; On Sale: February 24, 2015; $23.00; ISBN: 978-0-14-310756-9).

Hugo’s epic tale of injustice, heroism and love follows the fortunes of Jean Valjean, an escaped convict determined to put his criminal past behind him. But his attempts to become a respected member of the community are constantly threatened—by the relentless investigations of the dogged policeman Javert and by his own conscience. The stakes are high for Valjean, who has promised to protect the daughter of Fantine, driven to prostitution by poverty. And as his freedom is threatened, revolution breaks out in Paris, with far-reaching consequences for Valjean, his loved ones, and Hugo’s expansive cast of misérables.

In his introduction to LES MISÉRABLES , Robert Tombs praises the “literary power, intellectual sophistication, and subtlety of observation” of Hugo’s revolutionary masterpiece. Featuring a beautiful cover by acclaimed illustrator Jillian Tamaki and clear, illuminating notes by Donougher, this new edition invites readers to discover—or rediscover—the timeless narrative force and startling relevance of one of the world’s great novels.

Victor Hugo was born in Besançon, France in 1802. In 1822, he published his first collection of poetry, and in 1831 he published his most famous youthful novel, Notre-Dame de Paris. A royalist and conservative as a young man, Hugo later became a committed social democrat and was exiled from Paris as a result of his political activities. After his death in 1885, his body lay in state under the Arc de Triomphe before being buried in the Panthéon.

Christine Donougher is a freelance translator and editor. She has translated numerous books from French and Italian, and won the 1992 Scott Moncrieff Translation Prize for her translation of Sylvie Germain’s The Book of Nights.

Robert Tombs is Professor of History at St. John’s College, Cambridge. His most recent book is That Sweet Enemy: The French and British from the Sun King to the Present, co-written with Isabelle Tombs.

Jillian Tamaki is an illustrator and cartoonist. She currently teaches in the illustration Department of the School of Visual Arts, and is the co-creator of the graphic novels Skim and This One Summer, with Mariko Tamaki.