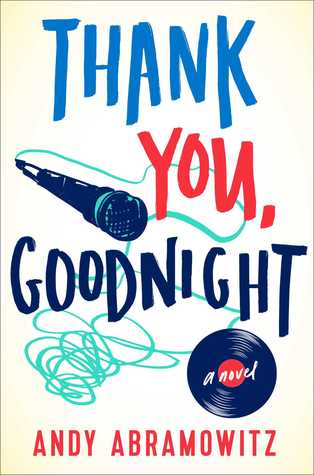 Nick Hornby meets Almost Famous in this side-splittingly funny coming-of-middle-age debut novel about the lead singer of a one-hit wonder 90s band who tries for one more swing at the fences.

THANK YOU, GOODNIGHT by ANDY ABRAMOWITZ is a bitingly funny debut novel about Teddy Tremble, the lead singer of a one-hit wonder ’90s band who just might be ready for an encore (on-sale June 2, 2015; Touchstone).

Like Teddy, Andy Abramowitz is a Philadelphia lawyer with a (slightly less epic) lead singer past.

This American Booksellers Association “Indie Next Pick” is the perfect read not only for lapsed musicians, but for anyone who has a go-to guilty pleasure song and all those who know that, even if you don’t achieve your dream of dreams, you can still lead a life to be proud of.

Abramowitz will discuss and sign his book at the following events:

Early praise for this in-house and bookseller favorite includes:

KIRKUS: “The pacing is quick, the emotional current soars, and the dialogue rings true. Abramowitz’s debut is both funny and compassionate, using the world of the music industry to illustrate the questions of life and legacy that so many of us ponder.”

RICK SPRINGFIELD, bestselling author and Grammy Award-winning musician: “Thank You, Goodnight is a hilarious send-up of the music industry, late-onset adulthood, and where the two often uncomfortably meet.”

BOOKLIST: “Very funny, deftly done . . . With a good deal of compassion and a great eye for the comic detail, Abramowitz delves a little deeper here. . . . A pleasure to behold.”

JOHN KENNEY, author of Truth in Advertising: “In the character of Teddy Tremble, Andy Abramowitz has created a kind of twenty-first-century Binx Bolling, a man in desperate search for meaning, maturity, and redemption. Funny, tender, and moving.”

Nearing forty, Teddy Tremble has settled into a somewhat comfortable groove working at a stuffy law firm and living in a tasteful apartment with an inscrutable woman he thinks he might love.  His days aren’t as exciting as the time he spent conquering the music world with Tremble, the rock band best known for its megahit single “It Feels Like a Lie,” but that decadent, delirious lifestyle ran its course.

Then a cryptic message from the drummer of his long-defunct band sets in motion a series of seismic changes in Teddy’s life.  A museum exhibit portraying his “legacy” in all its faded glory spurs a mission to an obscure village in Switzerland, where he confronts a traitorous photographer—and encounters an unexpected pocket of rabid fans.  Soon, Teddy is contemplating the previously unthinkable: reuniting Tremble for one last shot at rewriting history.  Never mind that the band members haven’t spoken in ten years, that they left the music scene in a blazing cloud of indifference, and that Teddy is harboring a shameful secret about why everything fell apart so quickly.

One thought on “Special Feature: Thank You, Goodnight by Andy Abramowitz”