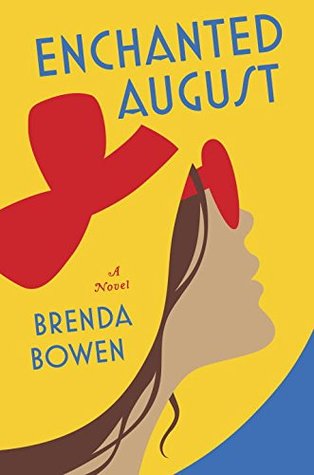 Bring on the summer reading!

For me, this was the perfect book to kick off summer reading with!

Four ladies renting a cottage by the sea for the month of August…all hoping to find peace and escape from their daily lives.

Lottie and Rose spot an add at their children’s preschool for a beach cottage rental off the coast of Maine.

Neither of them can really afford a beach holiday but if they can find a couple other women to split the rent, then they can enjoy a holiday by the sea.

Both of them need this vacation, Lottie’s husband is super over bearing and her sex life is basically non existent, and Rose whose life basically stopped when she had twins both need some time away…..they decide to book the cottage and figure out the financial details later.

As luck would have it, they find two other women who need this vacation just as much as they do. Caroline who was once a film star, who has just gone through a very public breakup, and elderly Beverly who is recovering from the loss of her husband.

The foursome embark on their own personal journeys and hope to heal the aches in their hearts on this small island in a cottage by the sea.

This was a book that is a little outside my comfort zone. I normally don’t read a lot of women’s fiction but I thought the setting and the promise of a personal ‘journey’ for our women characters was appealing.

The setting intrigued me. I haven’t read a lot of ‘true beach reads’ but a summer on the eastern seaboard held a lot of interest for me. Visions of clam chowder, clam bakes, and long lazy bike rides filled my minds eye.

This book and it’s setting embodied the east coast summer house feel for sure, but what I loved more than the authentic setting was that the island itself was so remote and isolated. There were no cars and no internet so the women could truly get a way and enjoy the scenery.

For me, the setting added a lot to the novel and I could just imagine sitting on the wrap around porch of Hopewell Cottage, taking in the fresh sea air trying to figure out what I’m going to do with my life. The east coast and seashore represents a certain nostalgia for me.

For me personally, I found something in each women that I admired and could relate to. The characters were quirky and so different from one another that I am sure most readers would be able to identify with at least one of them in one way or another.

This book is an updated story based on 1920’s novel The Enchanted April by Elizabeth von Arnim. While I have not read that novel, other reviewers have said that Enchanted August follows the plot of the original but is more contemporary with modern dialogue and more modern characters. I would agree that the novel is very modern with some sexual references but I think it is tasteful and fit well in the overall story.

So what didn’t I like…..that’s difficult to say. While I really enjoyed the novel and the journey of the women there were some things that just felt ‘wanting’ for me and I’m having a hard time trying to piece it together.

For instance, I wanted it to be longer. I mean over all the stories wrapped up nicely and the characters grew and changed as expected but for me it just ended too soon. I’ve been trying to put my finger on just what it was that felt wanting…..maybe more in depth, detailed growth or something….I’m not sure I just wanted more.

Also, some of the content was a little heavy at times. I wanted a little more humor to break things up in some way. Sometimes I just felt sad for the women. I was satisfied with the overall resolution but something about the novel just felt incomplete for me.

I wouldn’t classify this as ‘just a beach read’. The journeys and changes that these women make are satisfying and inspiring. This isn’t just a fluff book, it has substance and I really enjoyed my time on Hope Island!

One thought on “Review: Enchanted August by Brenda Bowen”