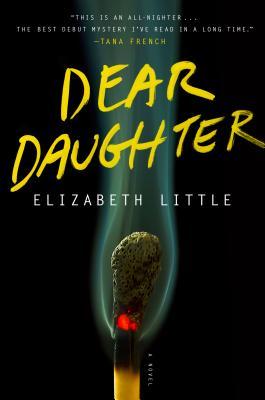 LA IT girl Janie Jenkins has it all. The looks, the brains, the connections. The criminal record.

Ten years ago, in a trial that transfixed America, Janie was convicted of murdering her mother. Now she’s been released on a technicality she’s determined to unravel the mystery of her mother’s last words, words that send her to a tiny town in the very back of beyond. But with the whole of America’s media on her tail, convinced she’s literally got away with murder, she has to do everything she can to throw her pursuers off the scent.

She knows she really didn’t like her mother. Could she have killed her?

To celebrate the upcoming release of this thrilling mystery, I am spotlighting an interview with Elizabeth Little! Without further ado please welcome Elizabeth Little to The Lit Bitch!

The Lit Bitch: What was the most difficult scene for you to write in DEAR DAUGHTER?

It’s not a scene so much, but the most difficult thing to write was the exceedingly cruel letter Jane’s mother leaves for her. I almost had to take to my bed after that one—I hated that I could channel that kind of maternal nastiness! It still makes me shudder. I spent a lot of time cuddling my son that night.

The Lit Bitch: Did you have an idea or an outline for DEAR DAUGHTER before you started writing it? Did the direction change once you sat down to being working on it?

The idea that turned into DEAR DAUGHTER was an image rather than a story: a woman, just out of jail, getting ready to cut her hair. From there I did put together an outline … which I subsequently discarded in its entirety. (Rue was a murderous twin when I started!) This was the first time since high school I’d written fiction, so I had absolutely no clue what I was doing. It took a lot of fumbling around before I finally settled on the plot.

And honestly, when I look back, I suspect it could have used even more fumbling. My favorite mysteries are infernal, impeccably crafted machines, and I hope that with each successive novel I’ll get closer and closer to this ideal.

The Lit Bitch: Is your heroine based on something you found missing in the thriller/suspense genre?

I have to say that Jane really happened by accident, not by design. I’d originally intended to write this sheltered bookworm character who had no clue had to interact with the outside world (someone who much more resembles me, in other words). But at some point early on, Jane started mouthing off, and before I knew it I’d spun her into this catty, attention-grabbing, but nevertheless deeply lonely Paris Hilton type.

This was before GONE GIRL, so I couldn’t have predicted at the time how over-saturated the market for anti-heroines was about to become, and in some ways I regret the timing of it, because there was no way that Jane wasn’t going to be seen by some as an homage to Amy Dunne at best—and a pale imitation at worst. And that’s bummed me out at times, for sure. But it would be disingenuous to pretend that the success of GONE GIRL didn’t help drive interest in DEAR DAUGHTER, so I can’t exactly cry myself to sleep about it.

The Lit Bitch:  With the heroine being released from prison, I can imagine that you did a lot of research about the legal system, can you talk a little bit about how that came together for you? What sorts of research did you have to do?

This is going to horrify many mystery readers and writers, who for good reason usually really pride themselves on and place a great deal of importance on research, but I wasn’t too interested in ensuring the accuracy of the jurisprudential specifics. I kind of take the position that Jane would be an exceptional case given her fame and reputation, and therefore it’s not unreasonable to expect that everything wasn’t exactly on the up and up, legally speaking.

And ultimately I’m personally much more interested in psychological realism than I am in external or physical realism. I try to get the details I do include right, but beyond that I’m not averse to a little hand-waving. It was, nevertheless, important to me that Jane have a believable and consistent internal logic. So in that regard I did do a great deal of reading about prison life in general and the psychology of solitary confinement in particular.

The Lit Bitch: Did you do any travel or interviewing as part of your research, if so please discuss what that experience was like for you.

I spent two years traveling for my second nonfiction title, so I have to admit that I was a little burned out on travel by the time I started DEAR DAUGHTER (and also my son was only three at the time, which meant I both needed and wanted to stay close to home). Luckily I’ve traveled so extensively throughout the United States that I have a good sense of the general feel of the areas that appear in the book—it doesn’t hurt that I’ve been to the Black Hills about a half a dozen times.

Also, since the primary setting of DEAR DAUGHTER is fully made-up, I could get away with a lot on my own. That said, I definitely always had maps and pictures and weather data and historical information on hand.

The Lit Bitch: Was there any specific event, headline, or story that inspired you to write DEAR DAUGHTER?

It really all started when I got the CNN breaking news alert about Amanda Knox’s first release from prison. I couldn’t sleep that night I was so busy thinking about what she would do next—she was just so infamous! Would she just try to go back to her life as it was before she moved to Italy? Would she go the reality-TV route? Or would she take on an entirely new identity and try to start fresh?

That last option, obviously, was the one that intrigued me the most, and the next day I started to write about … a girl who had just gotten out of prison and was preparing to take on a new identity.

The Lit Bitch: Who is your all time literary crush, author or character?

That is such a hard question! I tend to develop crushes on couples rather than individuals (which is to say, I guess, that I like to ship couples—perhaps a remnant of my rabid X-Files fandom?). My favorite couples are without question Harriet Vane and Peter Wimsey, Dorothy Sayers’s wonderful amateur detectives, and Beatrice and Benedick from Much Ado About Nothing. And also, probably, if I’m being totally honest, Clarice Starling and Hannibal Lecter. Let’s not delve too deeply into what that says about me.

The Lit Bitch: You have written non-fiction works as well, can you talk about how this work of fiction was different? Was your process different? Was fiction easier to write for you or more challenging?

For me, the nonfiction narrative begins with research, whereas with fiction the story begins with character. Before I even type two words into a nonfiction document—and this is true no matter how long or short the project—I’ve already spent hours and hours at the library and online. But this isn’t just diligent scholarship: It’s also the result of deep intellectual insecurity. I’ve always feel like I’m not quite smart or informed enough to be doing nonfiction, so I try to make up for it with research.

And this is, I think, one of the reasons why I’ve moved into fiction. After all, I can feel fully qualified as an expert on something I’ve made up! This doesn’t mean that fiction is more or less challenging—comparing the difficulty of formulating a cogent argument to crafting a compelling character is kind of an apples-to-oranges situation—but it definitely means that it’s more enjoyable, and much better for my self-esteem.

I also have more license in fiction to play around with language. I think with nonfiction you want to strive first and foremost for clarity, but with DEAR DAUGHTER I could really have fun with structure and rhythm and word choice. In other words, it’s much more satisfying for me on a sentence level to write fiction. Also I get to crack more jokes.

The Lit Bitch: What do you think it is it about celebrity or the rich and famous scandals that hooks people in? Is it just the glitz and glamour or do you think it’s something more? How did you use this to your advantage in DEAR DAUGHTER?

It would probably take about eighteen dissertations and many more degrees than I have to answer this question well. But I’ll say that for myself, at least, my fascination with any given celebrity scandal depends not necessarily on glitz or glamour, but rather 1) how bizarre the scandal is and 2) how strong my feelings are—be they negative or positive—for the celebrity in question. And I think that’s probably broadly true, so the really question isn’t what it is about scandals that hooks people in, but how is it that we develop these complicated relationships with people we don’t know and will almost surely never meet?

While I can’t answer this either, it is nevertheless certainly something I was looking to explore in DEAR DAUGHTER, particularly with regard to the role of the media and of our cultural notions about what makes a “good girl” and what makes a “bad girl”, and I hope it’s of some interest to readers.

That said, I didn’t set out to write an “issue book.” I just wanted to write a rollicking good mystery. These were just themes that naturally came up as Jane’s character revealed itself to me.

Right now I’m working on my next thriller, which is called FOLLOW ME and should be coming out next summer. It’s not precisely a sequel to DEAR DAUGHTER, but I suppose you could call it a companion. Noah Washington—Jane’s lawyer in DEAR DAUGHTER—is been called home to Mississippi to track down his missing brother, and the undertaking turns out to be far more complicated than he ever could have expected. He falls in love, falls out of love, digs up family secrets and, oh yeah, also joins a possibly murderous cult. I’m hoping readers will have as much fun reading it as I’m having writing it!

Elizabeth Little was born and raised in St. Louis and graduated from Harvard University. Her work has appeared in the New York Times, the Wall Street Journal, and the Los Angeles Review of Books, among other publications. She has written two works of nonfiction: Biting the Wax Tadpole: Confessions of a Language Fanatic (Melville House, 2007) and Trip of the Tongue: Cross-Country Travels in Search of America’s Languages (Bloomsbury, 2012). Dear Daughter (Viking and Harvill Secker, 2014), her critically acclaimed debut novel, was a Los Angeles Times bestseller and will be published worldwide. Dear Daughter has been nominated for the Barry and Macavity Awards for Best First Novel, was longlisted for the CWA John Creasey Dagger, and won the Strand Critics Award for Best First Novel. Elizabeth lives in Los Angeles with her family.