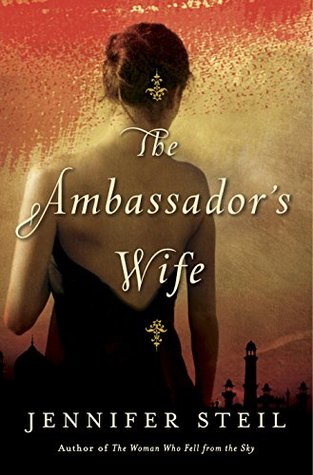 This book made me want to quit my job and apply at the U.S. Embassy immediately!

I really enjoyed reading this one! It was a nice break from some of the books I’ve been reading lately. I thought this book was going to be much different than it was….for one I thought it was going to be set in like the 1940’s or something but it’s not….it’s actually a modern novel.

I don’t read a lot of contemporary fiction but I do make exceptions when the book or premise sounds unique and different and this fit the bill.

Artist Miranda is living in Mazrooq where she instructs Muslim women on painting….the kind forbidden in their culture. Miranda is kind of a free spirit, very bohemian and enjoying being free to paint and enjoy the Mazrooq people. Then she meets Finn.

Finn is a British ambassador who has just arrived in Mazrooq. He is only need there a few days when he has a chance encounter with Miranda in the market. Their acquaintance soon blooms into something more and before they know it, they are in love.

But Finn’s lifestyle is anything but bohemian…..having ten body guards and panic buttons hidden all over his Embassy compound is just normal day-to-day life. Though Miranda enjoys the perks of being an ambassador’s wife, at times it can be daunting.

One morning, Miranda wants to go out for a hike…..just like she has done many time before, but this morning it won’t be like any other time. She and her entourage get kidnapped by militant rebels, Finn fears the worst.

This is a story about love, marriage, and the secrets we all keep.

For me, Miranda totally didn’t fit the ideal I had in my mind when it came to an ambassador’s wife….she was totally a free spirit and her life was very checkered…..not straight laced like Finn’s. While at times their relationship seemed unlikely and odd, it worked. They worked together as a couple, each having what the other lacked or needed.

I quickly became invested in their relationship, even though it was an unlikely match, I was convinced of their feelings about each other and my heart broke for them having to endure something like that.

The author was a former ambassador’s wife herself and she wrote with such authenticity and knowledge, I was quickly caught up in the beauty, romance, and excitement that goes a long with being an ambassador’s wife. While I am sure it’s not all sugar and spice and everything nice, as a reader I fell in love with the idea of it and longed to be in a job or life like that! She made the reader love the lifestyle, but yet she writes in such a way that the reader is also wary of all that glistens being gold.

The added use of the Arabic language in the text added a lot to the authenticity of the novel. I felt like through that, I was connecting to the Arab culture and the people of the novel in a unique way. Like Miranda, I too fell in love with the people of Mazrooq and the culture. This is a culture that as an American, I don’t get a lot of exposure to so I relished being able to read about an exotic faraway land with a completely different culture.

I loved how the novel switch between past and present, the story flowed seamlessly and progressed with enough momentum to keep things exciting but yet slow enough to savor each piece of the story we got. I really enjoyed this book if you can tell. It was a special treat and different from my typical review genres, but it sounded so good that I couldn’t pass it up!