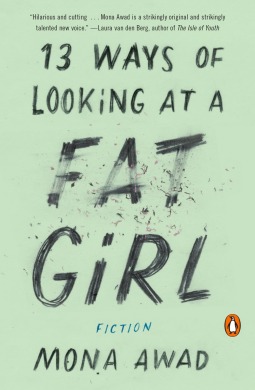 Since the book, 13 Ways of Looking at a Fat Girl, has been released at the end of February it’s been on everyone’s lips not to mention all over social media!

From People, Washington Post, Chicago Tribune, Huffington Post to magazines such as O to Cosmo and Marie Claire, pretty much anyone who has picked it up has been blown away. Roxane Gay has even called the book “necessary” and “Beautiful” and just this week highlighted it in a recommendation list for iBooks.

People are saying that it’s one of the most powerful novels they have read. Many are saying that author Mona Awad is saying things that have been in the heads of readers all over and they find camaraderie and comfort in her latest novel.

Awad tells the story of Lizzie March in a series of vignettes, starting with her awkward teenage years palling around the suburban town she calls “Misery Saga” with her best friend Mel. She navigates friendships, dating, and fraught relationships with both of her parents, constantly seeking confidence and acceptance.

When she leaves high school she begins, through a course of extreme deprivation, to lose the weight, until she can squeeze into the tight dresses she covets. But being thin doesn’t fix everything—in fact, her relationships with her mother, her husband, and her friends are only further complicated by her new physique, and all the complex feelings that surround it.

13 Ways of Looking at a Fat Girl may focus on Lizzie’s particular issues around body image and self-acceptance, but anyone who has ever felt the angst and alienation of growing up, who has ever felt inadequate or wished to be something other than what they are, will see themselves in this book.

With a book that is sending this powerful message and discussing these important issues that many women feel……I don’t expect the conversation about this book to die down anytime soon.

The folks at Viking/Penguin have created a stunning book club kit that includes playlists, movie lists, recipes, recommended readings, as well as discussion questions and an author Q & A. I highly recommend checking out the kit as well as the book! I am so bummed I couldn’t fit it into my review schedule for March but I am hoping I can swing a review later this spring or early summer!