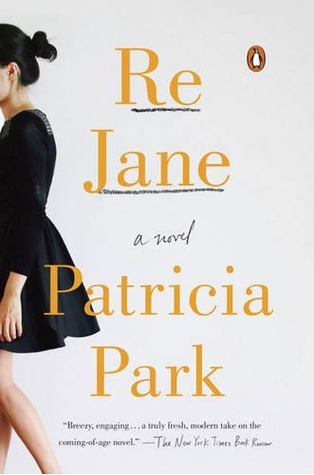 RE JANE: A Novel (Penguin Books ; On-sale: April 19, 2016; $16.00; ISBN: 978014310794) by Patricia Park is a fresh, contemporary retelling of Jane Eyre and a poignant Korean-American debut novel that takes its heroine Jane Re on a journey from Queens to Brooklyn to Seoul—and back.

For Jane, a half-Korean, half-American orphan, Flushing, Queens, is the place she’s been trying to escape from her whole life. Sardonic yet vulnerable, she toils, unappreciated, in her strict uncle’s grocery store and politely observes the traditional principle of nunchi (a combination of good manners, hierarchy, and obligation).

Desperate for a new life, she’s thrilled to become the au pair for the Mazer-Farleys, two Brooklyn English professors and their adopted Chinese daughter. Inducted into the world of organic food co-ops, and nineteenth-century novels, Jane is the recipient of Beth Mazer’s feminist lectures and Ed Farley’s very male attention. But when a family death interrupts Jane and Ed’s blossoming affair, she flies off to Seoul, leaving New York far behind.

Reconnecting with family, and struggling to learn the ways of modern-day Korea, Jane begins to wonder if Ed Farley is really the man for her. Jane returns to Queens, where she must find a balance between two cultures and accept who she really is.

Perfect for readers of Ruth Ozeki, Chang-rae Lee, Allegra Goodman, and—of course—Charlotte Brontë, RE JANE is a bright, comic story of falling in love, finding strength, and living not just out of obligation to others, but for one’s self.

PATRICIA PARK was born and raised in Queens and is a graduate of the Bronx High School of Science. She earned her BA in English from Swarthmore College and an MFA in Fiction from Boston University. A former Fulbright Scholar and Emerging Writer Fellow at the Center for Fiction, she has published essays in The New York Times, Slice, and the Guardian. She has taught writing at Boston University, CUNY Queens College, and Ewha Womans University in Seoul. She lives in Brooklyn, New York.

RE JANE: A Novel

A Conversation with Patricia Park, author of RE JANE

What was the genesis of RE JANE? What inspired you to put a Korean-American immigrant spin on Jane Eyre?

Whenever I misbehaved as a child, my mother would say in her limited English, “You act like orphan!” This always puzzled me—how can you act like an orphan? But for mother, who grew up during the Korean War, to be an orphan meant to act in a mischievous way that shamed your family. It meant you never received “a good family education.” She was simply reflecting the beliefs at the time.

I first read Jane Eyre when I was twelve, and was struck by the many epithets thrown at Jane: she was wicked, mischievous, friendless. Later, in grad school, I learned those epithets reflected the Victorian constructions of orphans. They were shameful, the Other—of questionable lineage, morals, manners. My mind drew the link between the Victorian construction of the orphan and the Korean post-war one, and RE JANE was born.

How much did you draw from your own experiences in writing RE JANE?

Like Jane, I also grew up in the Korean community in Flushing, Queens. I, too, used to ride the 7 train, staring out at the Midtown skyline. Unlike Jane, I’m not half-Korean; I’m “full.” In Jane, I chose one of the most disenfranchised figures in Korean society—a mixed-race, illegitimate orphan. In some ways, I might also represent the eyes of Flushing, looking critically at Jane for not being “one of us.”

You received a Fulbright grant in order to research RE JANE in South Korea. As a Korean-American woman yourself, were there particular aspects of Korean culture that surprised you or that you found unexpected in some way?

I was hopelessly naive when I arrived in South Korea. Like many Korean-Americans I thought the country was the same backwards, poverty-stricken land of our parents’ stories. Turns out: the country had advanced exponentially in the interim. The Koreans (unhyphenated) found me rather amusing. I sounded like a 65-year-old fuddy-duddy with a southern twang.

Nor was I expecting the extreme aesthetic expectations put on women. Every ad in the subway is for a plastic surgery clinic. There’s a makeup shop or three on almost every block. I went out wearing jeans, sneakers, and no makeup, and I got a bit of flak for that. Teachers making “polite” suggestions, shopkeepers turning their noses, that sort of thing.

RE JANE discusses reverse immigration—what happens when “hyphenated” Americans go back to the “motherland” and expect to be welcomed, only to find that they don’t belong. What about the issues facing Korean-American and Asian-American communities in regards to immigration, reverse immigration, and community-building do you hope that readers will understand after reading RE JANE?

Hyphenated Americans like me are often asked, “Where are you really from?” It’s a dangerous question because (1) it implies you don’t really belong here, and (2) it sets you up for the false expectation that you’ll be met with open arms “back home.” Re Jane is a quest for Jane to answer—as well as reject—that question, as she travels from Flushing to Carroll Gardens to Seoul and back. The novel is about finding a community that feels like the right fit—regardless of what or where we “come from.”

Your novel is partly about academics and academic life, which seems like a natural fit given Jane Eyre’s ubiquity in English literature programs. Why do you think that these stories are so appealing, and why did you choose to write about academics yourself?

When I arrived at Swarthmore, I felt the same culture shock Jane feels on arriving at the Mazer-Farleys’, which I can only describe as: WTF? Everyone walked and talked in a way that felt very foreign to me. I guess I write about academia because it’s the antithesis of the world I grew up in, and I find fish out of water stories fascinating.

In RE JANE, you deal with issues of blue-collar work versus academic work. Could you talk a bit about the tensions between these two forms of work and how they challenge how Americans think about what it means to be successful?

I come from a blue-collar background, and when I was part of “the academy” I found the two worlds have very, very different notions of success. In America, the more respectful (read: white-collar) your job, the more “successful” you are deemed to be. I saw this when I was both a university professor and a cashier. Ultimately, I think we should rethink the stigmas we attach to certain kinds of work.

RE JANE is an explicitly feminist retelling of Jane Eyre. What were some of the challenges that you faced in “translating” Victorian literature for a 21st-century audience?

In Nice Work, David Lodge famously satirizes the four fates for Victorian heroines: marriage, inheritance, emigration, and/or death. Joking aside, the unfortunate reality is that women of the era were not afforded the same options as their modern-day counterparts. In early drafts of RE JANE, Jane came off as very passive and old-fashioned—not at all like Jane Eyre, who was fiercely independent despite her times (yet still—very much a product of). I realized I had to abandon some traditional frameworks of Jane Eyre in order to create a contemporary heroine who takes action yet still has room to grow. I kept true to the spirit of the original Jane…even if that meant a revision of Brontë’s iconic line, “Reader, I married him.”

Transformative retellings of classic literature from a variety of perspectives and degrees of seriousness—from Longbourn to Pride and Prejudice and Zombies—are growing in popularity. Why do you think that this is the case, and what about retellings appeals to you?

What’s the saying—all stories boil down to seven basic plots? It’s risky business to take a classic work that is so ingrained in the hearts and minds of the public and put your own spin on it. For me, I wanted to pay homage to one of my favorite novels, and translate it into the times we live in now. Retellings certainly seem to be in the zeitgeist. Not just in literature, but TV and movies as well—Sherlock, Transformers, 21 Jump Street. I think all but the purest of purists want a new and fresh way to experience something that is beloved to them.

What do you love most about RE JANE, and what do you hope that readers will love about it?

I love the humor of RE JANE and hope readers will, too. The book tackles some weighty issues, but the comic moments cut through that weightiness. I also hope to speak to anyone who feels disenfranchised from the communities they’re “supposed” to belong to.

What are you working on now?

I’m working on my second novel, which features a minor character of RE JANE (guess who) and takes place in the Korean “ghetto” in Buenos Aires, Argentina—where my family used to live before immigrating to the States. It’s also set in western Queens and the campus of Swarthmore College.

One thought on “Special Feature: RE JANE by Patricia Park”