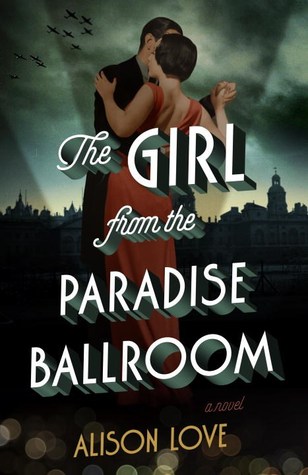 Soho, 1937. When struggling Italian singer Antonio meets the wife of his wealthy new patron he recognizes her instantly: it is Olivia, the captivating dance hostess he once encountered in the seedy Paradise Ballroom.

Olivia is afraid that Antonio will betray the secrets of her past, but little by little they are drawn together, outsiders in a glittering world to which they do not belong.

At last, with conflict looming across Europe, the attraction between them becomes impossible to resist – but when Italy declares war on Britain, the impact threatens to separate them for ever…

That’s the description of this latest historical fiction novel and to my surprise…..the description didn’t really match the novel which was unusual for me. I noticed other reviewers noted the same thing.

I think what caught me off guard was the implication of an ‘epic romance’ based on the description of the novel. The description, to me, implies epic based on using the war as a backdrop. In most war time romances that I’ve read, they are typically pretty long and the war plays a larger role in the story overall.

In this book, the war basically served as a period reference rather than playing a larger role or adding anything additional to the plot. I would have liked to have seen the war play a larger role in the drama/romance. There were references to bombings and blackouts but there wasn’t any real mention of how these things impacted the characters or even what they were doing. It lacked action and to me a WWII setting indicates that more action or interaction with the war would be inevitable and for me that didn’t happen in this book in the way that I had hoped.

This story was a quick read……at just over 260 pages this book flew by for me! I loved the pace of the novel and didn’t feel like it drug out or anything, the only thing I might have changed was maybe making it a little longer. I felt like the relationship between Antonio and Olivia needed a few more pages to establish and sort things out between them. I liked each of the characters separately but when they came together I wasn’t sure that I was entirely convinced by their romance.

It wasn’t that they didn’t have chemistry…..they did but I just didn’t think there was enough established chemistry throughout the story to win me over entirely as a reader.

That said, this was a quick read with likable characters. While the romance part was a little wanting, the characters themselves were interesting and I enjoyed watching their development throughout the story. For example, I was intrigued not just by Olivia and Antonio, but Antonio’s sister Filomena had an interesting romantic connection with Constable Harker. I liked that there were other interesting characters in the book to identify with an become invested in.

If you are looking for a epic romance that involves the war…..this might not be the book you were hoping for. However if you are looking for a book that is quick to read with interesting characters and a little romance with the war as a backdrop with a hint of a family saga then this will be an enjoyable read for you! I don’t know that I loved it but I definitely liked it! Not to mention the cover is beautiful! It’s eye catching and elegant and totally embodies the beauty and romance of the period!

Book: The Girl from the Paradise Ballroom by Alison Love

2 thoughts on “Review: The Girl from the Paradise Ballroom by Alison Love”