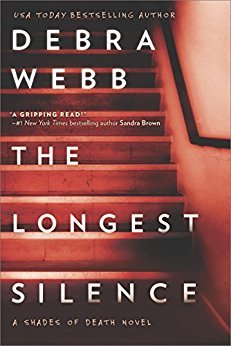 Spring reading is coming and with it comes a bunch of exciting new thrillers and mysteries to read over spring break.

This latest hot thriller and romantic suspense novel, comes from USA Today best selling author, Debra Webb and I am thrilled to be able to offer a tantalizing excerpt for my readers!

It’s due to come out March 1st, so mark your calendars and be on the look out for this new release!

Joanna Guthrie was free. She had been for eighteen years–or so she needed everyone to believe. What really happened during the longest fourteen days of her life, when she and two other women were held captive by a dangerous serial killer, wasn’t something she could talk about. Not after what they had to do to survive.

But when more women go missing in an eerily similar manner, Jo knows her prolonged silence will only seal their fates. She’s finally ready to talk; she just needs someone to listen. FBI special agent Tony LeDoux can’t deny he finds Jo compelling–he’s just not sure he believes her story. But with the clock ticking, Jo will do anything to convince him, even if it means unearthing long-buried secrets that will land them squarely in the crosshairs of the killer (summary from Goodreads).

“I wanted you close.”

Tony dredged up a smile for his sister. “Saved me the trouble of looking for a place.”

Angela LeDoux Durand looked so damned much like their mother with her fair skin and dark hair and those oddly pale eyes, more gold than brown. Sometimes even her voice made him have to look twice to ensure their mom wasn’t talking to him. Tony had inherited his lighter hair and darker eyes from their father. Right now, his sister’s eyes were filled with worry and fear—the same worry and fear he felt churning in his gut.

“I was afraid you’d be angry.”

Tony tossed his bag on the floor of the room. “Why would I be angry?”

Ang had been to Milledgeville several times to see Tiffany. She’d stayed at this historic inn every time, which was why she’d automatically called in a reservation on the way here. Only this time she’d reserved a room for him, as well. Not a problem. Really. He and Ang had always been close. As kids they’d been inseparable. Even as teenagers they’d shared many of the same friends. Adulthood hadn’t changed that—at least not until recently. Sharing the news of his divorce with his sister had been relatively easy, the career crash and burn, however, was a whole different ball game. He didn’t want to see the disappointment in her eyes. She’d always looked at him as if he was a hero, starting the day he’d kicked nine-year-old Lacon Turner’s butt for putting gum in her hair.

He did not want to fail her or Tiffany now.

Ignoring his question, she gestured to the room at large. “I knew you’d need some privacy. I hope this works.”

The pool cottage was behind the main house with its four guest rooms. A narrow rear yard, small parking lot and the pool stood between the cottage and the back steps of the hundred plus year old home. The cottage accommodation was bigger than the rooms in the house and had its own kitchen. His sister had been right about the need for privacy. The last thing he wanted right now was for her to start worrying about his personal issues.

She summoned a weary smile. “Good. I’ll see you in the morning.”

She’d insisted he replay verbatim his meeting with the chief of police. To prevent the hysteria he noted beneath the surface of her carefully controlled expression, he’d done as she asked—except for the news about the other girl. He loved his sister and he would do anything to find Tiffany, but there were some things civilians didn’t need to know.

Civilians? He almost laughed at himself. You’re a civilian now, dumb ass.

Maybe so, but he’d seen things. There were things he couldn’t erase from his brain—things that haunted him every single hour of every day of his life. Those things were what really scared him where Tiffany was concerned.

Don’t go there yet.

Before his sister could go, he pulled her close and hugged her tight. “We’ll find her, Ang. I promise.”

She cried for a minute. He squeezed his eyes shut to hold back his own emotion. He had to be strong for her and for Tiffany.

Tony stood at the door and watched as she crossed the property, returning to the main house. The night air had a chill to it. Once Ang was inside, he closed and locked the door. He plugged in the laptop Ang had carried in for him. The damned thing had been in the trunk of his car since the day he walked out of his office. The box of personal possessions from his office was still in his trunk, too. He hadn’t cared about looking at any of it. The few scattered personal items he’d kept on his desk were just a reminder that he’d screwed up. The photo of his ex-wife he’d shoved into a drawer months ago. The bag of peppermints he’d recently started using to conceal the alcohol on his breath. The keys to the house that was no longer his. His ex got the house and the dog and his best friend—who hadn’t really been a friend at all as it turned out. Tony had gotten nothing. Didn’t matter. He didn’t need anything. The townhouse he moved to suited his needs and friends were overrated.

Enough about the past. His new motto was to live in the moment.

He closed the blinds and dug into his bag where he’d stashed the pint of bourbon he’d found in the trunk—ironically in the box of personal effects from his office.

He opened cabinet doors until he found the mugs. A mug in hand, he made himself comfortable at the table. He fired up the laptop. While it loaded, he poured himself a healthy serving of bourbon. He’d been dying for a drink all evening.

The first sip burned like hell. But the promise of that burn allowed him to begin to relax. He downed another swallow and focused his attention on the laptop screen. Time to see what his niece had been up to on social media. He may have walked away from his career with the Bureau’s Behavioral Analysis Unit but he still had a few valuable contacts.

Even when the police had officially listed her as missing it would take time to unlock all the barriers that prevented law enforcement from seeing what Tiffany had been doing online and on her cell phone the final days and hours before she disappeared.

Tony intended to know as much of that as possible before he closed his eyes tonight.

The chief had made a reasonable point when he mentioned Tiffany’s occasional disappearing acts. Tony got that. But this time was different. He trusted his sister’s instincts far more than he did those of Chief Phelps.

There were necessary steps that had to be taken before determining Tiffany’s status. As with unlocking her phone and social media accounts, each step required time.

If she was in trouble, time represented one of the biggest threats to her staying alive.

3 thoughts on “Excerpt: The Longest Silence (Shades of Death #4) by Debra Webb”