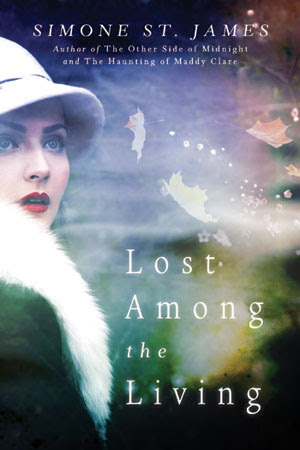 After finishing two of Simone St James novels in less than a week, I was thrilled when this one came into the library and was waiting patiently in the holds section for me to pick up.

I had read a lot of great reviews for this book and was eager to see what kind of ghost and romance this story would hold. It sounded a little different than The Haunting of Maddy Clare but still within the same wheelhouse of that style, so I was intrigued.

Working as a paid companion to Alex’s wealthy, condescending aunt, Dottie Forsyth, Jo travels to the family’s estate in the Sussex countryside. But there is much she never knew about her husband’s origins…and the revelation of a mysterious death in the Forsyths’ past is just the beginning…

All is not well at Wych Elm House. Dottie’s husband is distant, and her son was grievously injured in the war. Footsteps follow Jo down empty halls, and items in her bedroom are eerily rearranged. The locals say the family is cursed, and that a ghost in the woods has never rested. And when Jo discovers her husband’s darkest secrets, she wonders if she ever really knew him. Isolated in a place of deception and grief, she must find the truth or lose herself forever.

And then a familiar stranger arrives at Wych Elm House….. (summary from Goodreads).

So the last line in the description of the book, basically gave away a huge plot point….spoiler……Alex isn’t really dead. It didn’t take a genius to figure that out from the get go. The novel drops heavy hints from almost the first page. So I don’t consider this a spoiler at all.

After reading this description, I guessed that I might not like this one as much as the other books and I was right. I personally love ‘will they won’t they’ romances or ‘the thrill of the chase’ romances and this one had already happened. I felt a little disappointed because of that. Sure we got to see how they met and the reunion, but for me it just didn’t have the same impact for me.

I liked Alex just fine and I thought the backstory of his disappearance was interesting (though predictable) and almost an early era James Bond. He was dashing, charming, smart, ambitious, and loyal to the woman who stole his heart. He cut the rather dashing war hero role well.

I was a little frustrated with Jo. I didn’t know that the storyline with her mom was as necessary as St James made it out to be. Sure it added a little bit of a Gothic element, but I don’t think it was critical to the plot itself. Jo was a little too wishy washy for me. She didn’t interact with the ghost in this story in the way that I had hoped. Francis (the ghost) seemed like she was just there. I didn’t get this unfulfilled need to find out what happened to her and I didn’t see Jo connecting with her in any special way.

While this novel was very predictable, I kept reading because I wanted to know the why and how the pieces of the puzzle fit together. As I have said before, sometimes the reasons are more chilling and creepy than the crime itself. It seems to be that way with St James’s novel, some predictability but the atmosphere and reasons for the crimes are startling and surprising.

For some reason while I was reading this one, the line ‘Last night I dreamt of Manderley’ from Rebecca, kept running through my mind. Wych Elm House kind of had that same feel…it was haunting yet beautiful and for me took on a life of its own in the story. While not the focus of the novel, the woods and the mist reminded me of another famous Gothic literature house.

All that said, for me this book just simply missed the mark. Sure I liked it and I kept reading late into the night but it didn’t have the romance and creepiness that I was looking for. I have a few more St James novels to read and by no means has this book put me off of her writing, but it just wasn’t as good as some of the others in my opinion.

Other reviews I read had a much different opinion than I did which is fine, had I started with this novel I think I would have felt the same way but I already read two others by St James that I just thought were so much better than this one. A lot of other reviewers hope she writes a series about these characters (all of St James’s books are standalone which I LOVE) and I can see why people would hope that because I too felt like there was more story to tell about these two, however I don’t see their story taking on a real ghost story feel though, but rather more of a spy power couple.

I am eager to see what ghosts and romances are awaiting me in next weeks library pick up!

Book: Lost Among the Living by Simone St James

One thought on “Review: Lost Among the Living by Simone St James”