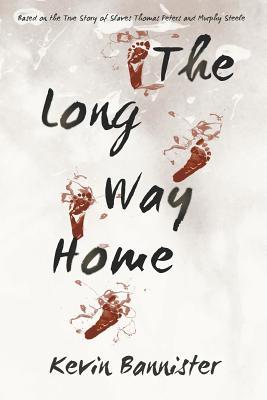 This book has been getting rave reviews on Goodreads and I am thrilled to be able to offer you a sneak peak of this interesting book!

If you love early American history then this might be the book you are looking for this holiday season…..and an excellent gift option as well!

This is Kevin Bannister’s debut novel and it demonstrates not only unique storytelling but a promising future for this new writer. Keep reading to read an exciting excerpt from this novel!

Set in the turbulent times of the War of Independence, ‘The Long Way Home’ follows the lives of Thomas Peters and Murphy Steele who are friends, former slaves, fellows-in-arms and leaders of the Black Brigade. Their real-life story is an epic adventure tale as they battle bounty hunters, racism, poverty and epidemic in their adopted country after the war.

‘The Long Way Home’ has resonated with readers around the world as an unforgettable account of courage, hope and determination triumphing over despair and injustice. Thomas Peters, thoughtful and charismatic, and Murphy Steele, strong and impulsive, lead their followers on an inspirational search for a place where they can be free (summary from Goodreads).

The ongoing social unrest in France has reminded me that people have not changed much over the time of recorded history and the issues that plague our civilization today were also problems for our ancestors.

The issues in France, and, indeed in much of Europe seem to be centered around government, the assimilation of immigrants into society and a widening gap between the few very well off and the numerous not so well off. In my historical novel ‘The Long Way Home’, the same themes are in play. The book details the struggles of two ex-slaves to gain freedom and establish real homes for themselves, first during the War of Independence and then in Nova Scotia as black loyalists. Thomas Peters and Murphy Steele were real people and the challenges they faced were real, long-rooted and difficult to resolve.

There are many exciting adventures in the book. One of the most harrowing took place in Shelburne, Nova Scotia in July, 1784 when white British loyalists rampaged through the streets of the town, attacking recently arrived black loyalists. The source of their anger has a familiar ring—they objected to the arrival of immigrants whom they felt had taken their jobs by being willing to work for lower wages. Their anger, though understandable, was misplaced. Both the white and black loyalists had been promised land, food and work as a reward for fighting on the losing side in the War of Independence.

However, the government in Nova Scotia was corrupt, particularly on the local level, so wages were not fully paid, food was hoarded from the needy, and land was not granted. The white British loyalists received wages for road work that were barely enough to get by and when the black loyalists arrived those wages went down to starvation levels. And starve many of them did, both blacks and whites.

Where did the allotted money, food and land go?

You already know the answer. A large percentage of the money supposed to be used for wages was not distributed to the loyalists (many of whom had fought for the British in the war) and remained in the pockets of local officials who became very wealthy. The food which was supposed to be steadily given to the loyalists to tide them over while they got settled, was stored by lower officials who sold it or gave it out at whim. The land grants were not surveyed in good time. The best land was often claimed by powerful interests and church groups and was not distributed to the settlers.

In short, though the details may differ slightly, the causes of the Shelburne Riot of more than 200 years ago were basically the same as those of the riots in Paris we see today. And, of course, of similar unrest that occurred during the centuries before Shelburne and in modern times too.

Writing ‘The Long Way Home’ took a lot of research. It always struck me that some of the challenges that Thomas and Murphy faced were quite similar to those we all face today though obviously much more intense. The good news is that people can only be pushed so far with government corruption, discrimination and an unequal systemic class structure before they push back with social unrest, revolution and riots. The bad news is that it is still necessary, after all the centuries, for people to have to push back against the entrenched elite.

Kevin Bannister is an author and rancher living in the beautiful foothills of Alberta, Canada. He is a former journalist, editor and business executive. He is currently working on a sequel to The Long Way Home.

2 thoughts on “Excerpt: The Long Way Home by Kevin Bannister”