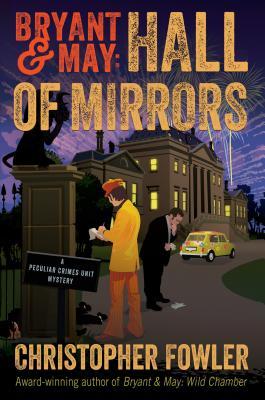 I happened to pick up the first book in the Bryant and May series a couple of years ago at my local used book shop. The first thing that caught my eye was the interesting and quirky cover.

In a sea of mystery novels the early Bryant and May covers really caught my eye. I would probably have never picked up the books had I not seen these lovely covers.

When I read the first book, the one thing that stood out head and shoulders above the rest was the dead pan banter between the two detectives—they had so much chemistry and it made the story fun to read and the shifting between the younger Bryant and May characters and the now older Bryant and May.

As soon as I was done I went out and bought the next four books in the series because not only did I love the covers but I loved the two detectives. But sadly that’s where things ended for me. I got caught up in other books and other series and just didn’t make my way back to this one for some reason.

Fast forward a few years and here is the 15th book in the series and when it came up for review, I couldn’t pass it up—-mostly because I wanted a quality mystery novel and I knew that author Christopher Fowler wouldn’t disappoint.

London, 1969. With the Swinging Sixties under way, Detectives Arthur Bryant and John May find themselves caught in the middle of a good, old-fashioned manor house murder mystery.

Hard to believe, but even positively ancient sleuths like Bryant and May of the Peculiar Crimes Unit were young once . . . or at least younger. Flashback to London 1969: mods and dolly birds, sunburst minidresses–but how long would the party last?

After accidentally sinking a barge painted like the Yellow Submarine, Bryant and May are relegated to babysitting one Monty Hatton-Jones, the star prosecution witness in the trial of a disreputable developer whose prefabs are prone to collapse. The job for the demoted detectives? Keep the whistle-blower safe for one weekend.

The task proves unexpectedly challenging when their unruly charge insists on attending a party at the vast estate Tavistock Hall. With falling stone gryphons, secret passageways, rumors of a mythical beast, and an all-too-real dismembered corpse, the bedeviled policemen soon find themselves with “a proper country house murder” on their hands.

Trapped for the weekend, Bryant and May must sort the victims from the suspects, including a hippie heir, a blond nightclub singer, and Monty himself–and nobody is quite who he or she seems to be (summary from Goodreads).

Ok so let’s get this out of the way now—I absolutely hate the cover art. It screams Scooby Doo and it just looks like every other cover to me. It blends in and doesn’t in anyway stand out for me. I love the old cover art with the Bantam editions. Had I seen this one in the store I wouldn’t have even known it was a Bryant and May mystery because the other Bantam edition cover art was used throughout much of the series and was so unique and an easily recognizable branding. I was sad to see that they had gone in a different direction with the cover art.

That said, you obviously can’t judge a book by it’s cover. Had I done that I would have missed out on yet another wonderful mystery! While I read the first book, there have been 14 other books between the first book and this one so the question then becomes, would I get lost in this book so late in the series.

One of the brilliant things about this series is that as a reader you can basically pick up any book that you want because each case or book is independent of the others. Bryant and May are older now and basically recounting their former adventures with each book being a different case. So if you missed a book here and there, you really don’t need to worry too much about being lost. I love that about this series!

I love how this series moved through pop culture and history. I recall from the first book how much I loved that the Blitz played a large roll in the mystery and ambiance of the story—-that same approach continues in this book as well except now it’s the 1960s so the historical and pop culture elements are different, but no less important in the story.

This is yet another country house party turned murder mystery and I never grow tired of the plot that Agatha Christie made famous. This is such a quirky whodunnit that I never got bored with the mystery/plot or characters. For me this was another win for Fowler.

The mystery was smart and the characters an odd mix but yet perfectly matched.

Book:  Hall of Mirrors (Bryant & May #15) by Christopher Fowler