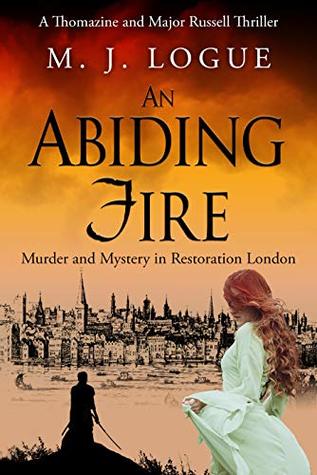 How do you solve a murder when you are one of the suspects?

Life should be good for Major Thankful Russell and his new bride, Thomazine. Russell, middle-aged and battle-scarred, isn’t everyone’s idea of the perfect husband for an eligible young woman but the moment Thomazine set eyes on her childhood hero, she knew they were destined for one another.

But Russell, a former Roundhead, now working for the King’s intelligence service, was never going to have a simple life in Restoration London.Unable to shake suspicions of his Parliamentarian past, someone seems hell-bent on ruining his reputation — and his life.

Whispers about his sister’s violent murder follow him and accusations of treason abound. When more deaths occur Russell finds himself under suspicion. He is ready to escape from the capital, but Thomazine is determined to find the truth and clear the name of the man she loves.

But who is the real killer and why are they so keen to frame Russell? More importantly, will they succeed? And has Thomazine’s quest put them all in mortal danger?

Russell came bolt upright with a yell of his own and Thomazine came upright with him, though she was barely awake. He could smell smoke.

“Fire,” he said,every hair standing up on his neck and the flesh cringing on his bones. “Tibber!” He took her by the shoulders and shook her till her head lolled on her shoulders and her eyelashes fluttered butshe would not wake. He couldhear the crackle of flames and the warm orange glow of firelight under the door, could hear raised voices and running feet on the stairs, the roar of the flames and the first splintering crash as the windows —

“Wha’?” she said drowsily, and he was half out of bed and pulling her with him, dragging her by the arm across the crumpled sheets.

The wench was heavier than she looked, deadweight, and she pulled her arm free and blinked at him sleepily, “What?”

“It’s all right,” she said, and he half-believed her, and she shook his arm until he looked at her. “Thankful. It is all right. It’s —”Another yowl of bloodcurdling ferocity split the air and Thomazine’s eyebrows rose. She opened the door a crack as a further set of footsteps went thumping down the landing. “Mama? What’s amiss?”

The sight of Het Babbitt on the shadowy landing, as plump and four-square as a little hedgehog in her stout flannel nightgown, was oddly comforting. “Nothing, dear,” she said blithely. “There have been babies a-plenty born under this roof before, and I imagine there will be plenty more to come. Everything proceeds as it should. And really, Thankful, to be so squalmish — I recall you standing in that very doorway when Joyeux was born, dear, you are no stranger to childbirth.” She gave a fond, reproving shake of the head. “Now, young lady, I am needed elsewhere, for I very much suspect you will be an auntie again by dawn. Go back to bed, the both of you. Your father is gone for the midwife, Zee, so I am sure there will be much commotion shortly.”She pottered down the landing towards the stairs. Thomazine closed the door again, firmly.

“There, now, you see? We are not besieged, the house is not falling —”

She was laughing, and he was not. In his head, he knew that he was in a place of safety with the woman he loved and that all was well. In his heart — a woman screaming, the sound of hoofbeats crashing on the stone flags of the yard, the leap and flare of firelight —

He shook his head.

“Come back to bed,” she said gently, “you are shaking with cold, lamb.”

Not cold, but fear, and he hated it, all the more for knowing it was not real, that he was afraid of a phantom in his own head. His mouth was very dry and his marred cheek stiff as wood, but he choked down the bile in his throat and said, “My. Sis. Ter.” And his voice was slurred, odd, and she glanced at him with a look of understanding. Shecrossed the room again, barefoot and tall and slight and radiant as a white candle, to squat on her haunches in front of the dying fire and shake the jug of spiced ale that had been left there. Shepouredthe last of it and offeredit to him wordlessly.

He didn’t taste it, but the warmth of it eased the shivering cold in his bones and he swallowed it gratefully.

Thomazine set the jug back in the ashesand perched herself on the bed, cross-legged.

He was awake now. He could not see Thomazine with her skirts blazing around her, or her loose hair burning like the tail of a comet. He could not smell roasting meat, or imagine the shattering roar as the roof fell in to obliterate her dear body under a ruin of charred wood and broken glass. “Four Ashes burned,” he said softly, his voice under control again. “That much you know. Well. My sister burned with it. She was in the house. Idream of it, sometimes.” He thought, but did not say, that sometimes it was not Fly he saw in his dreams, but other people, the people he loved. Burning. Always burning and begging to be saved, and he was always standing outside. Standing in the thin rain of a Buckinghamshire winter night, with the heat on his face and the whirling sparks like scarlet snow and the roar and whoosh of collapsing timbers.

Thomazine touched his hand and he snatched at her fingers and held them, hard, and in his head he was pulling her free from the falling timbers. Too hard, he thought, for her level brows drew together in a tiny wince. He was sorry for it.

“Yes,” she said.“I imagine you would.” And then, after a little pause, she freed her hand and linked her fingers through his, that he might not squeeze them quite so hard anymore. “I’m sorry, Russell. I don’t think I have said that before. I am truly sorry.”

He was tired and his head was beginning to ache with lack of sleep, so he was honest and he said, “I’m not, tibber.”

He thought she might be shocked. She took a little sharp breath, but then she glanced up and looked both sad and angry at once. “I am sorry for you, love. Not her.”

“No one deserves to die so,” he said softly, and it was the first time he had said as much aloud, and the closest he had yet come to forgiveness. “No matter how vile a sinner they may be. No one deserves that death. I am sorry she died so hard. I am not sorry she died, and I cannot find it in my heart to mourn her.”

J. Logue (as in cataLOGUE and epiLOGUE and not, ever, loge, which is apparently a kind of private box in a theatre) wrote her first short novel on a manual typewriter aged seven. It wasn’t very good, being about talking horses, but she made her parents sit through endless readings of it anyway.

Thirty-something years later she is still writing, although horses only come into it occasionally these days. Born and brought up in Lancashire, she moved to Cornwall at the turn of the century (and has always wanted to write that) and now lives in a granite cottage with her husband, and son, five cats, and various itinerant wildlife.

After periods of employment as a tarot reader, complaints call handler, executive PA, copywriter and civil servant, she decided to start writing historical fiction about the period of British history that fascinates her – the 17th century.

Her first series, covering the less than stellar career of a disreputable troop of Parliamentarian cavalry during the civil wars, was acclaimed by reviewers as “historical fiction written with elegance, wit and black humour” – but so many readers wanted to know whether fierce young lieutenant Thankful Russell ever did get his Happy Ever After, that the upcoming series of romantic thrillers for Sapere Books began.

She can be found on Twitter @Hollie_Babbitt, lurking on the web at asweetdisorder.com, and posting photos of cake, cats and extreme embroidery on Instagram as asweetdisorder.

One thought on “Excerpt: An Abiding Fire by M. J. Logue”