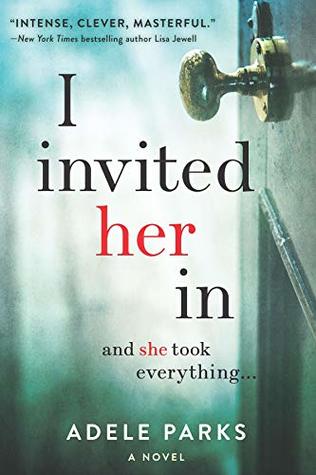 I immediately recognized the name Adele Parks when the book came across my desk for review. I haven’t read any of her books, but it was a name that I had seen before. I had meant to pick up one of her books long before this, but for some reason I just never did.

I decided to remedy that and read her latest thriller, I INVITED HER IN. I liked that this book was not only a thriller, but one that featured two female best friends but late in their friendship.

It didn’t sound like it was going to be one of those ‘I just met this girl and we are friends but she turns out to be crazy’ books. This plot sounded a lot more in-depth and multifaceted than that traditional troupe.

I Invited Her In is a blistering tale of wanting what you can’t have, jealousy, and revenge from Sunday Times best-seller Adele Parks (summary from Goodreads).

This was a great revenge story. The plot had a lot of twists and I loved how the timelines in the story intertwined. There were flashbacks that helped guide and shape the story which I found enjoyable.

But in the end it felt more like a domestic suspense mixed with some women’s fiction themes like marriage, friendship, and motherhood. So in a lot of ways I felt that it was misrepresented.

Over all, this book probably wasn’t for me, but I think the author has a lot of potential based on some of the reviews I have read about her other books. I am probably in the minority when it comes to this one, but in the end it was just ok for me. I have heard a lot of people recommend her books to I think I will try something else by her instead.

Kindle Edition, 432 pages
Published February 5th 2019 by MIRA
ASIN B07BMVYG12
Free review copy provided by publisher, MIRA as part of the TLC Virtual Book Tour, in exchange for an honest review. All opinions are my own and in no way influenced.
Rating: 3 stars
Genre: domestic suspense

2 thoughts on “Review: I Invited Her In by Adele Parks”