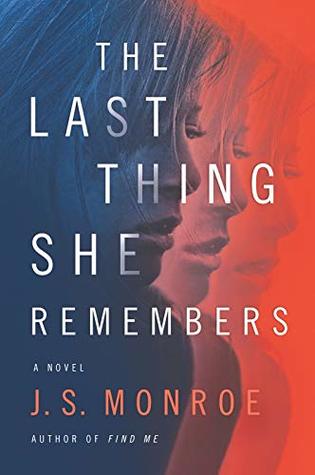 You all know how I love a good thriller. There is nothing better on a lazy weekend or especially on a beach or dark stormy night…..ok who am I kidding, thrillers are always fun to read!

I’m excited to tell you about this new psychological thriller that just came out yesterday!

After achieving international acclaim and bestselling success around the world with his novel Find Me, J.S. Monroe returns to chill readers with a gripping, twisting psychological thriller, THE LAST THING SHE REMEMBERS (Park Row Books; May 28, 2019;  $15.99 U.S./$19.99 CAN).

It’s about a woman who tries to reconstruct her life and identity while suffering from stress induced amnesia when her bag is stolen in Heathrow Airport.  In the vein of S.J. Watson’sBefore I Go to Sleep and Wendy Walker’s All is Not Forgotten, Monroe’s forthcoming novel is a story about memory, identity, and how people are not always what they seem.

Following a rough week of traveling for work, Jemma’s handbag with all her important possessions including her passport, credit cards, laptop, and house keys is stolen at the airport. Even more disturbing, when she goes to report the incident, she realizes she can’t recall her own name. Home and her past no longer exist in her mind, but the only thing in her pocket is a train ticket “home.” Jemma is a source of mystery when she arrives at the sleepy Wiltshire village where she thought she lived and quickly becomes a cause of fear and curiosity amongst the locals when no one recognizes her. Is she a victim or a killer? Where did she come from? All at the same time as she is thinking: Who are these people? Who am I?

In this shocking tale of deception and murky paths, J.S. Monroe forces readers raise dark questions about who we are, who we think we are, and who we pretend to be

J.S. Monroe studied English at Cambridge University, worked as a freelance journalist in London and was a regular contributor to BBC Radio 4. He was also a foreign correspondent in Delhi for the Daily Telegraph and was on its staff in London as Weekend editor. He is the author of six other novels and lives in Wiltshire, England, with his wife and their three children.