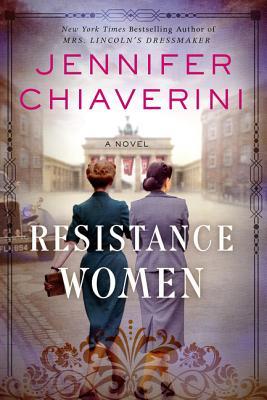 This book showed up on my desk for review a few months ago and I was absolutely in love with the cover!

It reminded me of spring and it was elegant and had a lot of visual interest. The summary also sounded like something I would love, as I especially love war time stories.

Chiaverini has written a variety of different books, with her most widely known book being Mrs Lincoln’s Dressmaker as well as a women’s fiction quilting series called, Elm Creek Quilts.

After Wisconsin graduate student Mildred Fish marries brilliant German economist Arvid Harnack, she accompanies him to his German homeland, where a promising future awaits. In the thriving intellectual culture of 1930s Berlin, the newlyweds create a rich new life filled with love, friendships, and rewarding work–but the rise of a malevolent new political faction inexorably changes their fate.

As Adolf Hitler and his Nazi Party wield violence and lies to seize power, Mildred, Arvid, and their friends resolve to resist. Mildred gathers intelligence for her American contacts, including Martha Dodd, the vivacious and very modern daughter of the US ambassador. Her German friends, aspiring author Greta Kuckoff and literature student Sara Weiss, risk their lives to collect information from journalists, military officers, and officials within the highest levels of the Nazi regime.

For years, Mildred’s network stealthily fights to bring down the Third Reich from within. But when Nazi radio operatives detect an errant Russian signal, the Harnack resistance cell is exposed, with fatal consequences.

Inspired by actual events, Resistance Women is an enthralling, unforgettable story of ordinary people determined to resist the rise of evil, sacrificing their own lives and liberty to fight injustice and defend the oppressed (summary from Goodreads).

I have to say that I admire Chiaverini’s ability to shift genres and write memorable stories. While this book was on the longer, more dense/heavy side (over 600 pages), I did enjoy it and I commend her for reaching out into a new genre. There were some parts that were a little slow for me, but on the whole I thought the book mostly flowed ok, but it was just slow in parts and had a lot of historic detail .

It definitely wasn’t a books that I was able to ‘breeze’ through. It took me a few days of aggressive reading to get through it. While it was an enjoyable story, it was just long and had a lot of heavy content to process and uncover. I did love reading about the 4 women though. I thought the author created interesting women and intriguing stories for them.

While this book was on the long side, I did feel like I learned some new bits about history. I liked that this book gave some female perspective on the state of Germany at the time of the war and I enjoyed getting a bit of ‘behind the scenes’ views of history here. I didn’t know that this book was based on a true story, the characters themselves were fictional, but their stories were based on true events. I thought that was exciting and well researched so I commend the author on this front but at times I felt like this book had a little too much history in some parts.

Overall I ended up going with 3.5 stars for this one. It was good and interesting, but the length was just a little much for the story in my opinion.