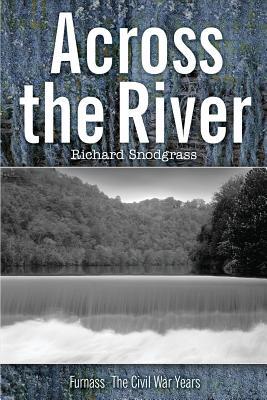 Civil War buffs, this is a novel you might want to put on your radar!

In the summer of 1863, Judson Walker, a captain of Morgan’s Raiders, and Jonathan Reid, a young engineer, come to Furnass to appropriate two of Colin Lyles’ steam-powered road engines. The purpose is to outfit the engines with iron plate and the newly developed Gatlin Guns, and, with Morgan, deliver the war engines to General Lee’s army in Central Pennsylvania. Amid Walker’s growing involvement with Lyle’s wife Libby, deserting soldiers, and Reid’s own agenda, Walker learns Morgan isn’t coming. The novel reaches its climax with Lyle trying to sabotage the war engines. Walker must decide between Libby and duty toward his men, the war and individual human values.

The Books of Furnass tell the story of a fictitious mill town, ten miles from Pittsburgh in southwestern Pennsylvania. At the heart of the series is the Furnass Towers Trilogy, about the efforts of men and women to maintain their lives, and the life of the town, in the face of the mill closings. In addition to contemporary life, the series chronicles the town when it was just an outpost after the French and Indian War…the town as it grew around an iron furnace in the wilderness…as it became an industrial center from the time of the American Civil War to the Vietnam War. And the series tells the story of the Lyle family, who were involved with the town from its founding to its struggles to survive after the mills went away (summary from Goodreads)

What inspired you to write ACROSS THE RIVER?

In writing the first of the Books of Furnass series—the Furnass Towers Trilogy—I became interested in learning more about the family of one of the main characters of the Trilogy, Julian Lyle, whose family was said to have founded the town and whose company, The Keystone Steam Works, was one of its leading industries in the 19th Century and the beginnings of the 20thCentury. Keystone Steam Works was one of the earliest developers in America of steam engines for applications other than locomotives, such as steam tractors, well drillers, construction equipment, etc. At the same time, I had a What If idea: what if the Confederates during the Civil War tried to develop, in addition to iron-clad war ships, iron-clad land vehicles—i.e., an early tank. The technology at the time hadn’t developed far enough to allow such a vehicle to be mounted with a cannon, but what about Gatlin guns, which were just coming into use in 1863. To complete the picture, I read in a history of Western Pennsylvania that in early summer 1863 a small detachment of Morgan’s Raiders were actually spotted in the area; no one knew where they came from and no one knows what happened to them, they apparently disappeared. Put all these elements together, and it seemed to me you had the basis of an interesting novel.

While living in San Francisco in the mid-sixties, after graduating from UC Berkeley, I started writing a number of short stories that took place in the extinct mining towns in the Sierras of Northern California and Western Nevada. But I soon realized that I wasn’t actually writing about that area at all, I was writing about the mill towns I had known in growing up in Western Pennsylvania. In the late seventies I decided to return to Western Pennsylvania to write about the area. I thought at first of locating the stories in an existing town such as my hometown of Beaver Falls, or Aliquippa, Ambridge, etc. But I found that was too limiting; the town I was writing about turned out to have a life of its own. For a while I called it Iron City, after a local beer, but again that was too limiting. I had admired an early novel written about the area entitled Out of This Furnace, but Furnace seemed too obvious. Consequently, I thought of Furnass—that seemed like the kind of name swap endemic to the region.

See above. Remember Western Pennsylvania has its own quirks of dialect and pronunciations. For example, the lovely name Monaca is transformed into “Mon-Naka,” and Charleroi comes out “Shar-la-roy.” To further develop the name, however, I came up with the following creation story:

In 1806, a wagoner hauling hardwood and limestone to the Lyle-Buchanan iron furnace got tired of missing the turnoff to the place tucked back in a ravine near the river and sent his son to make a sign. The wagoner’s lad did the best he could; he used lampblack and a splintered plank to make his sign and nailed it to a hemlock tree at the turnoff. Unfortunately, the lad couldn’t spell, and the sign came out reading

By the time someone came along who cared about the misspelling, a settlement had grown up around the iron plantation, and people were used to the name. So, Furnass stuck.

I can only hope.

From Across the River–any of them, actually. I found each one extremely interesting, in how they thought and the choices they make. As I noted, I find I write in order to understand why I want to write about