In the moving conclusion to “The Marriage of Miss Jane Austen,” Jane and her husband struggle with the serious illness of their son, confront a bitter relationship with the aristocratic family who were once their friends and face the horrific prospect of war when the British Army falters on the continent. The momentous events of the Napoleonic wars and the agonizing trials of their personal lives take Jane and Ashton to a decision that will decide their fate—and her future—once and for all.

Praise for The Marriage of Miss Jane Austen Series

Hemingway again displays his notable ability to recreate time and place, moving on from the heady days of Jane Austen’s early love to a marriage beset by difficulties and a country at war. Hemingway … vividly and authentically portrays the times. … [T]his is a lively, compelling read, [a] sobering but moving finale to Hemingway’s successful trilogy. —BlueInk Review

Immensely satisfying … Marriage is lively, compelling, and fun. … [Her] relationship with her husband Ashton still sparkles. Marriage is a lovely ode to their connection. … Hemingway has combined Austen’s humanity with her fiction and created a Jane that lives and breathes on the page. Audiences will want her to be real… It offers a wonderful, imagined alternate life for the well-loved author. —Claire Foster, Foreword Review

Collins’ passion for literature, history, and science enable him to create complete, sharply drawn fictional characters fully engaged in their complex and often dangerous worlds. His fiction is shaped by the language of the heart and an abiding respect for courage in the face of adversity.

As a nonfiction book author, Collins has investigated topics as diverse as corporate culture and ethics; the Internet and mobile technology; the ins and outs of the retail trade; and the cognitive potential of the brain. Best known for the #1 best-selling book on business and technology, Business @ the Speed of Thought, which he co-authored with Bill Gates, he tackles challenging topics with clarity and insight, writing for the intelligent but nontechnical reader.

Jane composed and dispatched the letter to Lovelace. There was no rudeness, despite the Lovelace family’s betrayal of their friendship, for Jane was a lady; but neither was there any amiable eloquence, only a plain statement of the issues. There was only the humane consideration of one horseman to another about his property: The mare, once the property of Jane’s husband but now possessed by Lovelace, had somehow escaped and found its way across two counties back to its native paddock. A hasty return to Lovelace would aggravate injuries suffered along the way and possibly lame the pregnant mare and endanger its offspring. Jane’s husband, Ashton, would provide for the horse until its recovery and delivery; and of course, the horse and foal would be sent in good health when they made their next deliveries to Lovelace’s regiment in the autumn. It was an aggravation that the rupture between the families did not cancel previous contracts between the men. The words about the injuries were not exaggerations; the more careful observations by the steward, Mr. Fletcher, revealed that the crack in the forehoof was deeper than Ashton could tell and inflammation was setting in.

The response from Colonel Lovelace was neither an appreciative acceptance of their offer, nor a polite rejection and counterproposal of when a transfer might be effected. Rather, it took the form of a dusty skirmish, which came to Jane’s attention when she heard a commotion toward the barn and looked out the window in time to see a flailing body flip over the rail of the arena. By the time she reached the scene, Sawyer and two companions stood outside the fence, hurling imprecations but otherwise hesitant, while Mr. Fletcher and several of his men formed a resolute barrier to their advance. The mare walked agitatedly back and forth behind them, but not in a panic and apparently suffering no direct harm.

“Watch your language, Mr. Sawyer,” Jane said as she came up. “There is a lady present.” Sawyer was the overseer for the Lovelace estate, another man with whom they had had unpleasant dealings.

He turned to her in anger and surprise. He had lost his hat and was covered in dust. Grains of sand sparkled on his forehead, and blood caulked around a split lip. “Your men are keeping me from my duty,” he said.

“These men seem to be protecting our property from thieves,” Jane said. “What have you to say for yourself?”

“I’ve come for my property,” he replied, his natural arrogance swelling with the indignity of having been thrown over the fence. “I’ll summon the magistrate if need be.”

“My husband being the magistrate, I have no doubt he will welcome the call—and have you whipped for the bother.” Her sudden anger was for the horse and more—for what she had seen Sawyer do to the poor black servant months before. Responding to the flare in her eye, he took a grudging step back and spoke with more civility.

“The mare is ours. I’m here to reclaim it, nothing more.”

“And what do you intend to do with her?”

“That does not concern your lady.”

“Your lady has every reason for concern. If any harm comes to that horse before its safe return, the Colonel will hold us responsible.”

“So you and your men can drive it too hard for seventy miles?”—They had learned the regiment was stationed outside Stanmer, even farther than they had believed.—“So the horse is ruined, or loses the foal? My responsibility is not to you, Mr. Sawyer, but to the horse and the family who owns her. We will maintain the mare until proper steps are taken for her recovery.”

“I’m the proper steps. I’ve come in the Colonel’s name.” Sawyer uneasily rubbed his short hair—sand colored and sand filled—as if recognizing that his effort to take the horse, rather than ask for it, could well send him home empty-handed. The two men with him began to shift uncertainly as well—not only in response to Jane’s forcefulness but also to the other workers who had congregated behind them wielding all manner of farm implements. One of Sawyer’s men acted as if he had wandered in by accident and might wish to wander away.

“If you had come with suitable authorization, you would have called at the house, announced your intentions, and produced documentation for your claims.”

“Ha!” Sawyer said, as if no honest man had to bother with such particulars. Looking around at the reinforcements, however, he added loud enough for all to hear: “I’ve a letter of reclamation from Colonel Lovelace.”

“And that gives you the right to simply—invade—our estate and take whatever you fancy?”

“You know that mare belongs to us.”

“When Ashton and I arrived unannounced on your estate several years ago, you were pleased to hold us with your pistol until matters could be sorted out. We had as much right to be there then as you have to be here now. Very well, I shall accord you the same courtesy. Mr. Fletcher, lock these men in one of the stalls. Retrieve our weapons from the storeroom. If they attempt to escape—shoot them.”

Saturday, December 28
Excerpt at What Is That Book About

Thursday, January 9
Excerpt at I’m All About Books

Friday, January 17
Review at WTF Are You Reading?
Review & Excerpt at To Read, Or Not to Read

During the Blog Tour, we are giving away a $25 Amazon Gift Card! To enter, please use the Gleam form below.

– Giveaway ends at 11:59 pm EST on January 17th. You must be 18 or older to enter.
– Paperback giveaway is open to the US only.
– Only one entry per household.
– All giveaway entrants agree to be honest and not cheat the systems; any suspicion of fraud will be decided upon by blog/site owner and the sponsor, and entrants may be disqualified at our discretion.
– The winner has 48 hours to claim prize or a new winner is chosen. 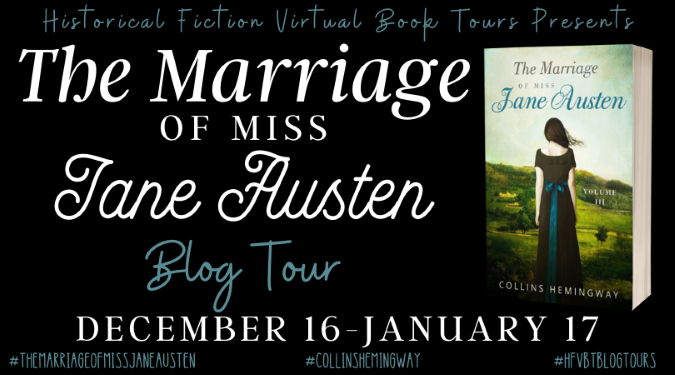 One thought on “Excerpt and Feature: The Marriage of Miss Jane Austen Vol. III by Collins Hemingway”