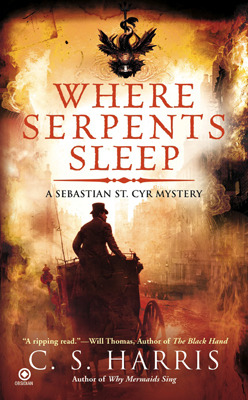 This series has quickly become a favorite of mine. I mean, I’ve read the later books and enjoyed them but now that I am going back and reading the other books in the series in order, I am seeing the nuanced relationships develop and I simply can’t stop reading!

I only meant to read one or two books in the series, but I’ve discarded that notion and am fully intending to binge read this series before the month is out!

I am currently starting book 6 so I am super excited to read all of the books and share not only my reviews but my take two reviews once I read the later books the second time!

Following a trail of clues from London’s seedy East End to the Mayfair mansions of a noble family, the two must race against time to stop a killer whose ominous plot threatens to shake the nation to its very core? (summary from Goodreads)

This mystery wasn’t as memorable to me. I mean it was good and I loved the twists and turns, especially when it came to the murderer! I was shocked by that person’s identity as it came completely from left field. I loved that! It kept me guessing and just when I thought I knew who it was, the author completely surprised me. But the murder itself wasn’t as shocking as some of the previous books but that’s ok, I still enjoyed it.

What this series was about for me was getting to know Hero. Hero has been kind of this character on the fringe of the series but in this book she takes center stage and I absolutely love her. She’s smart, strong, and maybe a little dry and sassy! I love her and Sebastian together. She gives zero f*cks about offending Sebastian and he is so good humored about it. He respects her and values her opinion and he isn’t overly protective of her and I like that. It gives her to space to evolve and develop in the story.

They have great chemistry and while some people feel that their romantic interest is slightly forced, I am going to reserve my opinion on that until I read a couple of other books. I mean it was a little out of the blue because in the early books Kat has been the focus, but to be honest once Hero and Sebastian were interacting more and more, I couldn’t deny that I felt they were much better suited.

The next book promises to be quite the page turner and I can’t wait to see what’s in store for Sebastian next but I am guessing the next book is going to be quite focused on his personal life.