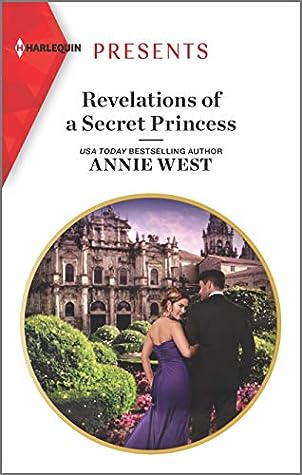 I have been featuring a lot of romances lately and I have another one here to share with all of you! Who doesn’t love a happy ending and the ‘thrill of the chase’ when it comes to romances? I know I sure do!

That’s why I have been sharing so many with you guys lately. When I pick up a novel, I want to escape life for a little while and enjoy something predictable, happy, and romantic.

And of course my go to publisher for all things romance is Harlequin! This lovely new novel from Annie West promises to hit all the high notes and I am thrilled to be able to share a little sneak peak with you guys today!

A princess in disguise…

To find her precious daughter, stolen from her at birth, Princess Carolina will do anything. Including masquerading as a nanny! Jake Maynard, her daughter’s uncle, is all that’s standing in the way of the reunion Caro has yearned for. If only her body got the message he’s the enemy…

Caro knows this powerful billionaire won’t give up the only family he has left. Yet after years of emotional numbness, Jake is reawakening her! He shows Caro a life filled with passion, not protocol, but what will happen when Jake discovers her true identity? (summary from Goodreads)

‘Jake, did you say it was St Ancilla Caro went to?’

Reluctantly Jake looked up from his emails. This project grew more complex by the hour and he wasn’t devoting as much time to it as he should. He’d spent the morning with Ariane.

On the other hand, his niece’s ease with him felt like victory. He owed her thawing, in part, to Caro, who’d done an amazing job in a short time. He’d been right to hire her.

Neil sank into the chair on the other side of his desk. His expression was unreadable, yet the fine hairs on the back of Jake’s neck stood to attention.

Jake leaned back in his chair. A tough early life, a stint in the army then years devoted to wheeling and dealing in the turbulent field of international finance meant it took a lot to unnerve him.

‘I tracked down another on our list of potential in­vestors and discovered they were in St Ancilla for a big event.’ Neil passed his tablet across the desk. It displayed a news article. If you could call it real news. Some royal event.

‘Check out the photo. The second one.’

Jake looked again, scrolling past a photo of a young, formally dressed couple smiling at the camera with all the animation of marionettes. Prince Paul of St Ancilla and Princess Eva of Tarentia, just engaged.

Beneath was a group photo. An ornate balcony on an imposing building, crammed with elegant women and men in heavily decorated dress uniforms.

‘And?’ Jake had no interest in aristocracy. He did business with them but his personal experiences with them hadn’t been happy. First had been the entitled for­eigner who’d lured his mother away, on condition she abandon her kids. Then just months ago, his own girl­friend suggested he put Ariane in an orphanage rather than bother with her. Both had been uncaring of any­one else, expecting the world to revolve around them.

‘Look closely. The one in blue.’

Jake frowned. Several of those uniforms were blue, plus a blonde in ice blue and…

He stared. It couldn’t be.

Of course it couldn’t. The woman in the deep blue dress was a vibrant redhead, not a brunette. Yet Jake felt adrenaline burst into his blood with a jolt.

He zoomed in on the woman, amazed at the like­ness.

No. It was impossible. Mere coincidence.

Yet the buzz in Jake’s bloodstream didn’t abate.

‘Yes, but she’s not his heir. Her younger brother is. Carolina isn’t in the limelight these days. She lives

fairly quietly in the north of the island though she’s very active in a number of charities, especially relat­ing to children.’

Jake peered at the woman. She was a ringer for Caro, except for the clothes and hair. And the royal connections.

‘Maybe our Caro is a distant relative.’

Our Caro? His choice of words made her sound—

‘There’s more.’ Neil took the device and opened an­other page, handing it back. With his usual efficiency he’d collated a precis on the woman.

The Princess had a string of names, had been born almost twenty-five years ago and lost her mother early.

Her father had remarried when she was two and she had three half-brothers. She’d studied in the US but didn’t finish her degree. There’d been a scandal. He read headlines about wild parties and drug use. Jake wasn’t surprised. Most of Fiona’s privileged friends preferred parties to work. What did surprise him was that after returning to St Ancilla, Princess Carolina had all but dropped off the radar. She didn’t live in the palace, merely appearing in the press at charity events or major royal celebrations like this, her half-brother’s engagement.

He scrolled lower, studying the shots Neil had col­lected. Stiff and formal on the same balcony with her family when she was a little girl. Again in her teens, looking almost gawky despite her expensive clothes and with her flame-colored hair now turning auburn, her head turned towards her father, her expression cu­riously closed. A shot of her with one of her brothers, both smiling for the camera but neither looking happy.

Jake began to feel almost sorry for her. Had the wild partying been rebellion after an unhappy childhood?

Then he scrolled lower and his breath caught.

This photo was different. Candid. He doubted she knew it had been taken. She wore casual clothes, her hair in a ponytail and she was in a crowd with other young people. At a party, by the look of it. She was half turned away, looking over her shoulder, but there was no mistaking the warmth in her expression as she smiled at someone beyond the camera. Her eyes, a re­markable deep violet, glowed. She glowed. Jake felt the impact of her joy judder through him.

He swallowed, mesmerized by those eyes. They were so like Ariane’s that for a moment everything, his pulse and his breathing, seemed to stop. He’d always thought the color rare. Maybe not so on St Ancilla.

He touched the screen, enlarged the photo and then his breath really did stop.

There, on the back of her shoulder next to the strap of her top, was a small birthmark shaped like a comma.

Jake had seen that mark three nights ago.

It had peeked out beneath the strap of a grey cami­sole when he’d held Caro in his arms.

cause the best kind of trouble in the lives of their heroines. As a sideline she researches locations for romance, from vibrant cities to desert encampments and fairytale castles. Annie lives in eastern Australia with her hero husband, between sandy beaches and gorgeous wine country. She finds writing the perfect excuse to postpone housework. To contact her or join her newsletter, visit www.annie-west.com