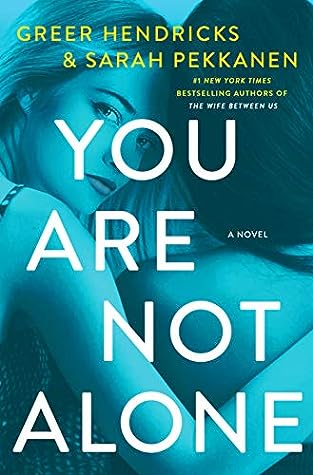 The first book I read by this team was their debut, The Wife Between Us, and I loved it. I thought it was a wild ride full of twists and turns and I couldn’t wait to read more by them.

I missed their second book, An Anonymous Girl, but I had no plans to miss this one if I could help it so you can imagine how thrilled I was to check this one out!

The hype for this book is real right now. It’s everywhere and everyone seems to be talking about it so of course there was a part of me that worried about all the hype it as getting, but I also know that this team writes twisty novels so I was hopeful that I would really enjoy it!

You probably don’t know anyone like the Moore sisters.
They have an unbreakable circle of friends.
They live the most glamorous life.
They always get what they desire.

Shay thinks she wants their life.
But what they really want is hers. (summary from Goodreads)

So I am just going to say this right off the bat…..I liked The Wife Between Us better. This wasn’t a bad book or anything, I just simply like their debut better than this one. I can’t really put my finger on why, but I just found that this one felt a little disjoined to me in a way that the first book by this team didn’t.

This is NOT part of a series or anything, so that wasn’t it. But for whatever reason, I just found that this one took me a little bit to get into. There were a lot of characters in the first half of the book which caused me to have to stop and remember who was who and how they fit in the story. The second half of the book read really fast though and I felt that the pace of the novel was better the more it went on but it still just landed as a 3 star book for me. It wasn’t terrible or anything and in fact I think I am in the minority, but I felt like it was good rather than great.

This book was still a worthwhile read and I hope you decide to read it and see for yourself. It was good but not in the same league as The Wife Between Us in my opinion.