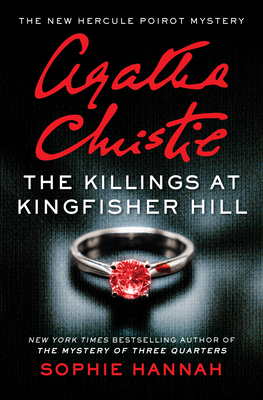 Is there really any debate about Agatha Christie being the queen of mysteries? I have only read a couple of her books and have enjoyed them very much but there is also a dated quality about them which was one of the reasons that I was excited to read this ‘New Hercule Poirot’ mystery from Sophie Hannah.

I haven’t read any of the ‘new’ Hercule Poirot mysteries before but I am familiar with his eccentric character and was really looking forward to this one.

One thing that grabbed my attention was that it had some hints of one of Christie’s classic novels, Murder on the Orient Express, so I was eager to check this one out and see a more modern take on this classic character.

The world’s most beloved detective, Hercule Poirot—the legendary star of Agatha Christie’s Murder on the Orient Express and Death on the Nile—returns in a delectably twisty mystery.

Hercule Poirot is travelling by luxury passenger coach from London to the exclusive Kingfisher Hill estate. Richard Devonport has summoned him to prove that his fiancée, Helen, is innocent of the murder of his brother, Frank. There is one strange condition attached to this request: Poirot must conceal his true reason for being there from the rest of the Devonport family.

On the coach, a distressed woman leaps up, demanding to disembark. She insists that if she stays in her seat, she will be murdered. A seat-swap is arranged, and the rest of the journey passes without incident. But Poirot has a bad feeling about it, and his fears are later confirmed when a body is discovered in the Devonports’ home with a note that refers to “the seat that you shouldn’t have sat in.”

Could this new murder and the peculiar incident on the coach be clues to solving the mystery of who killed Frank Devonport? And can Poirot find the real murderer in time to save an innocent woman from the gallows? (summary from Goodreads)

Having read the classic Christie novels with Poirot, my biggest fear was that Hannah would not do the eccentric character justice. I did think that she did a nice job capturing his character and giving him a bit of a modern spin but there were little things that I felt didn’t stay true to the classic character.  Though overall I think she did a nice job paying homage to the queen of mystery while providing her own take on the character. I think readers should try and keep an open mind when reading this new series, Hannah isn’t Christie and I am glad that she is taking on this series with the intention of bringing her own voice to Poirot. But it is hard for readers to keep the two separate. I tried to keep an open mind overall I enjoyed the book for what it was, a modern take on a classic character.

The mystery itself was fun and read very quick for me. I liked that it was a little more twisty than the classic Christie novels but yet the author kept some of the things that I love about Christie such as the house party/train party crime scene and characters. Sometimes it felt like there was a lot going on but I found the story and mystery exciting and engaging enough to keep reading. I wasn’t sure who the killer was until the reveal so that kept me interested.

While this is a series, I didn’t have a hard time following along or anything. I haven’t read the other books in the series so this was a first for me and it’s the fourth one. I didn’t feel lost or unconnected to the characters at all. I am looking forward to reading other books in this series and I think it was a nice detective story and it helped me escape into a new world with familiar characters.