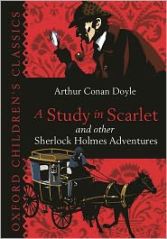 I have always been a huge fan of Sherlock Holmes but I have never actually read any of the books. So after coming back from London this summer, I was really excited to read the books.

I started reading the Sherlock Holmes Mysteries on the plane to London, beginning with A Study in Scarlet.

This was actually a pretty interesting novel as it let the reader get to know the main characters. Of course Dr. Watson is the narrator and writer of their adventures but Holmes is CLEARLY the hero.

The story begins with Watson returning from the wars and trying to find a place to live before he goes completely broke! A mutual friend introduces the two men and the reader learns a little of the very eccentric and complicated man who is Holmes. Holmes goes to university…..but doesn’t actually attend there…..he basically crashed the bio/chem departments classrooms.

Watson and Holmes seem like they can tolerate each other and decide to room together. Finally Watson understands…..(kind of)….what it is that Holmes does. Holmes speciality is attention to detail and the art of deduction. He is able to see things most don’t because he does not remember anything not worth remembering and does not trouble himself with nonsense. As the book goes on it is clear Watson is intrigued by Holmes and his methods. They solve their first murder together using Holmes’ methods alone (more or less).

However before they explain how they solved it—they started in on this whole sub plot and background info—honestly I was lost after the first few pages with Holmes’ methods. All of a sudden….we go from foggy London to the American desert in the land of the Mormons (Utah). And that’s where the story picks up.

I was totally lost but I felt surely this would be linked relatively quickly. After another 100 pages of so it finally becomes clear that the story is some how related to the murder in London.

The ending was a bit rushed and I still don’t understand how Holmes figured it all out in and I don’t know that the audience followed the logic or process either. So after reading A Study in Scarlet I decided to persevere and read the next novel in the collection. The Sign of Four was a little weird and also hard to get into.

The Holmes adventures are collective works. There are four novels and the rest are short stories, but the novels were short comparatively so I read A Study in Scarlet, The Sign of Four, and The Hound of Baskervilles  (3 novels) together.

In both books, Holmes and Watson are both still trying to get to know each others habits etc. In the Sign of Four, this is where Watson meets Mary.

Some guy keeps sending Mary a pearl every year for her birthday from her dead father. She works as a governess and she seeks out Holmes’ help in locating the man who keeps sending these pearls to her.

He agrees because he was propositioned as well by someone wanting similar information about some treasure. Watson and Holmes take Mary to visit this man and she is told that her father was murdered and then somehow they find a man upstairs murdered (not Mary’s dad though). Holmes does his little deduction tricks and comes up with some huge epiphany about how this is all coming together but he refuses to share until it is solved as he is worried vocalizing his thoughts might jinx the theory.

They find the murderer and after a steamboat chase down the Themes River, the murderer is apprehended. Then the book launches into this really long and quasi boring background on the guy. And then somewhere in there Mary and Watson fall in love…..literally over a dead body more or less…..and then we have a few pages where Watson is tormented by his love for Mary which he finally can no longer fight and he proclaims his love……again this is happening over the course of a couple of nights—max. I thought this was a little out of place and forced/rushed. I just wasn’t buying it, even for Victorian era England.

The third book The Hound of Baskervilles was a very welcome improvement to the first two novels. Though this novel was told almost entirely without Holmes, the character Sir Baskerville and some of the other characters made up for his absents with their own colorful personalities.

The novel itself has got to be known for it’s extrodinary use of symbolism with the moors of England. I’m a huge Victorian era/Gothic literature fan and the moors are such a great, haunting way of creating suspense and a mood for any book (think Wutherning Heights).

The set up was brief and there was no long background story. However, this book seems chronologically out of place for the characters. In this book Holmes and Watson talk about being together for ‘many many years’ ? What happened to Mary? I suppose I will find out in later stories. I am sure it seems logical to break down novels together, short stories together and so on but really it’s hard when one just wants to read what things happen in order etc. It’s a little frustrating.

Anyway, so the story was a little twisted but I liked that it was NOT set in London, it gave it a much different, unknown element which heightens the anxiety for the reader I think. Most of Holmes stories take place in London from what I understand so this must have been a welcome break for his readers of the era also.

The story was a little convoluted but it was the first time that the audience and Watson were able to use Holmes’ concepts and theories and see if they understood them and if they worked.

Perhaps this was why I was more engaged with this story than the others as I was actively participating. Finally when we have it just about figured out but are still a little puzzled, Holmes comes in and makes it all clear for us and the novel ends in a successful rescue of their ‘friend’ and ’employer’.

I have just started the final of the four novels, The Valley of Fear and I have to say….I’m a little bothered that now all of a sudden they are talking about Professor Moriarty and Holmes is like….blah blah blah our history goes way back. I don’t recall the Professor in the other three novels.

I am assuming that in the short stories this will all be explained but its making the novels extremely hard to follow. I will have to let you all know what I think about The Valley of Fear when I am done with it.

He was totally a head of his time! He clearly saw that science and forensic science was the future…..and he was right. Where would we be without DNA and forensics?

It’s actually pretty amazing when you think about it….what all he was able to come up with? I don’t know about anyone else….but I’m blown away when I read his primitive instincts about crime and crime scenes……very 21st century! And really who doesn’t love Holmes and Watson? They are just so fun!

Book: A Study in Scarlet, The Sign of Four, and The Hound of Baskervilles by Sir Arthur Conan Doyle

I’m not a psycopath, I’m a high-functioning socipath. Do your research.

7 thoughts on “Review: A Study in Scarlet and 3 Sherlock Holmes Novels by Sir Arthur Conan Doyle”