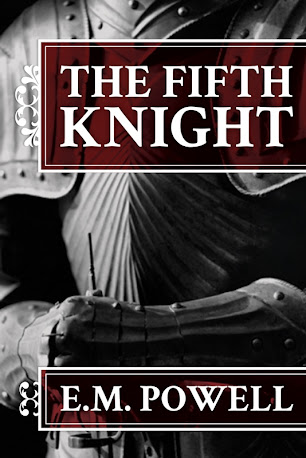 Sir Benedict Palmer and a group of four other mercenaries were to arrest one of England’s most powerful men, the Archbishop of Canterbury, Thomas Becket. But what was supposed to be a simple arrest quickly turns deadly.

Sir Palmer suspects the real target was a beautiful nun named Theodosia. The knight in charge of the arrest party, Fitzurse, means to kidnap Theodosia and also her missing mother. Sir Palmer is puzzled by this and begins questioning the motives of the other knights.

He frees Theodosia and helps her escape Fitzurse’s clutches but they must now rely on each other to survive and try and get to her mother before Fitzurse does. But there’s a big problem….Theodosia can’t get the image of the murdered Thomas Becket out of her head. Even though Sir Palmer didn’t participate in the actual murder, he was one of the five knights who invaded the cathedral.

Theodosia doesn’t trust Sir Palmer, but she really has no choice but to trust him since he is helping her after all and trying to save her life. They dodge danger and Fitzurse’s knights at every turn trying to stay one step ahead!

He continues to protect Theodosia and gradually he earns her trust, but she has earned something else as well…..Sir Palmer’s heart. He has come from nothing and knows in her eyes he will always be a sinner and unworthy of her but yet he has fallen in love with her spirit and courage.

Besides his conflicting emotions, something else is weighing heavily on Sir Palmer’s mind…..why was he sent to the cathedral in the first place and what was his true mission? Clearly there is something amiss and Sir Palmer means to find out who is behind the original mission and why.

Mystery and love some alive in this fast paced novel! I loved Sir Palmer’s character, he was the perfect mixture of a good ‘bad boy’–he has a moral compass but yet can still kick some ass when required. He’s a little cocky and sure of himself but not offensively though. He has clearly come from nothing and fought his way to glory, he has not had an easy life and he’s had to do some unfortunate things to get where he is, however he is not beyond redemption.

He wants to do the right thing and be an honorable man that is not only worthy of Theodosia and society in general. As for Theodosia’s character, I have to admit I didn’t like her at first. I felt like she was a little irritating and whiney in the beginning but after a while she started growing on me kind of like she started growing on Sir Palmer.

Eventually I came to admire her courage and strength the same as Palmer. I liked that she was a spirited, independent women who was willing to stand up for herself.

One thing that I struggled with throughout the novel though was the language style. At times I thought the prose was a little too informal and relaxed for the period. The dialog was a little fluffy and just came off as informal to me which I felt like distracted from the story.

The novel was a quick read the pace was steady and I felt like the story was constantly moving forward. At times the story felt a little predictable but I still felt like there was enough of a mystery to keep me interested.

I loved that the novel started off with an action sequence (Thomas Becket’s murder). I thought it was a great way to immediately introduce the principal characters and throw them together in an intriguing situation rather than having to build a long back story and make everything culminate throughout the novel. I really really liked that element in this book.

The period itself as a backdrop to this story really worked well. It’s a tumultuous time in England mixed with excitement, deception, and intrigue…all the elements that go along with this story. Two thumbs up with the period setting!

I did wish that there would have been a little more historic background though. The story of Thomas Becket is so important to the history of England and really shaped this time period. It would have been nice to play up that a bit more.

That said, if you are looking for a bit of courtly love with knights and damsels in distress then this is the story for you. This book has a little bit of everything: love, mystery, action, adventure, history, and evil villains all wrapped into one quick read!

Be sure to check out The Fifth Knight blog tour for interviews, guest posts, reviews, and giveaway opportunities. I also included a list of the other tour stops at the end of this post! Be sure to check it out!

Recommendation: 3.5 out of 5 (a solid Medieval tale of adventure and romance)

Tuesday, April 16
Review at Confessions of an Avid Reader

Tuesday, April 23
Review at Oh, For the Hook of a Book!

Wednesday, April 24
Interview & Giveaway at Oh, For the Hook of a Book!

Thursday, May 2
Review & Giveaway at Just One More Chapter

Friday, May 3
Review at The Musings of a Book Junkie

Monday, May 6
Review at Layered Pages
Review at Overflowing Bookshelves

Tuesday, May 7
Review at Raging Bibliomania

Thursday, May 9
Review at So Many Books, So Little Time

One thought on “Review: The Fifth Knight by E.M. Powell”