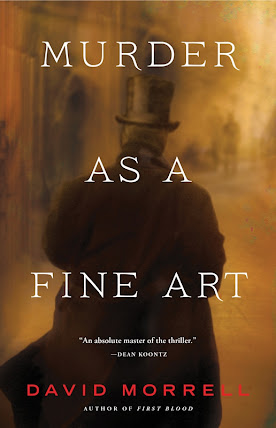 Terror has gripped the foggy streets of London in 1854. A family of five has been found brutally murdered–beaten to death with their throats slit–the youngest victim was an infant. Since nothing was taken and the crime scene neatly staged, it can only be considered a crime of the deranged.

Constable Becker was first on the scene, only missing the murderer by a matter of minutes. After raising the alarm, Detective Inspector Sean Ryan arrives and he immediately sees potential in Becker as an assistant.

They gather what few clues were left at the crime scene and realize they aren’t dealing with a mad man, but rather an educated man of means.

De Quincey is most famously known for this scandalous novel, Confessions of an English Opium-Eater. He later went on to write an essay title On Murder Considered as One of the Fine Arts where he proclaimed the Ratcliffe Highway murders the most prolific crimes of the time and he describes them in grotesque detail as if he was there.

Becker and Ryan immediately spring into action, they must find the Opium-Eater and interrogate him before the mobs of London get their hands on him.

When they find him, it is clear he would likely not be able to commit the murders himself….he is an small, older man, with a dependency on laudanum that has left him frail. He is also accompanied by his attractive and unconventional daughter, Emily.

Becker and Ryan rule out De Quincey as a suspect and use him as a resource instead. Clearly he has studied the original crimes in detail and perhaps might be able to help them profile a suspect.

They take De Quincey to the crime scene where they learn about a series of coincidences that brought De Quincey and his daughter to London, which seem to some how fit into the murder. A Malay messenger appears suddenly at the crime scene with a message for De Quincey containing a cryptic instructions.

Slowly an elaborate plan begins to emerge with De Quincey somehow at the heart of it all. The killer wants to be De Quiney’s new fine artist of murder.

There is nothing like a good old fashion thriller set in foggy old London by gaslight! I adore books like this! For me this novel was a thrilling mixture of Dickens era London mixed with some Sherlock Holmes inspired detectives and some of Edgar Allan Poe’s gore. It was superb!

I really enjoyed the setting and era. The Victorian era was such an exciting time in history. Criminology and forensics were really beginning to take on a life of their own. Not to mention all the modern advancements and social changes happening in the era….it was a time of growth.

At the beginning of the chapters, Morrell gives a short history lesson about the era which leads into the story. I wasn’t entirely sure that I was going to like this style. Initially I thought it would slow down the novel, but to the contrary I found the historic tidbits informative and not at all like a history lesson. I thought these facts gave the reader a unique understanding of the period.

I also loved that Morrell incorporated the Thuggee and India expeditions in the novel as well. That has such a strong influence on Victorian era London history and one that is often overlooked or left out. I really enjoyed this extra cultural flavor.

The characters were solid over all. I loved De Quincey, I thought he was brilliant and quirky which was just what the novel needed from a strong supporting character. I also liked Emily, she was spunky, unconventional, and comical at times which brought some comic relief to the otherwise intense thriller.

Becker was perfect as the honest, hard working hero who wants more out of his profession and whose talents are often looked over. The one character I never managed to connect with was Ryan. I thought he would be the main protagonist in the novel but I never really felt like he played a significant role.

Personally I kind of forgot about him from time to time, I just didn’t think he brought much to the table I guess. There was nothing that ever really endeared him to me and thus I never really felt like I connected with him. I thought Becker, Emily, and De Quincey were much more developed characters and memorable. I thought that Becker made the stronger protagonist and leader than Ryan did. I would like to see Ryan more developed if Morrell continues to write more novels with the two detectives in the future.

But other than that, the novel was a master piece of a thrilling historic mystery! I can’t get enough of novels like this….there is just something about foggy gaslit Victorian London that makes for the perfect setting when it comes to murder mysteries and thrillers….and what makes this novel stand out….is that its based largely on true events!

Morrell blends fact and fiction in this thrilling tale! Grad a cup of tea and curl up by the fireplace and let the mysteries of  foggy London consume you!

Book: Murder as a Fine Art by David Morrell

Recommendation: 5 out of 5 (a thrilling tale of murder in foggy, gaslit London)

Tuesday, May 7
Review at So Many Books, So Little Time

Wednesday, May 8
Review at Sir Read-a-Lot

Friday, May 10
Review at The Lit Bitch

Wednesday, May 15
Review at Confessions of an Avid Reader

Thursday, May 16
Review at Impressions in Ink
Guest Post at Confessions of an Avid Reader

Friday, May 17
Review at Flashlight Commentary

Monday, May 20
Review at Unabridged Chick

Wednesday, May 22
Review at Peeking Between the Pages
Interview at A Bookish Libraria

Friday, May 24
Review at JulzReads

Monday, May 27
Review at From the TBR Pile

Tuesday, May 28
Review at My Reader’s Block
Review & Giveaway at My Reading Room

Thursday, May 30
Review at Girl Lost in a Book
Review at The Little Reader Library

Monday, June 3
Review at As I Turn the Pages
Review & Giveaway at Broken Teepee

Thursday, June 6
Review at The Bookworm

2 thoughts on “Review: Murder as a Fine Art by David Morrell”