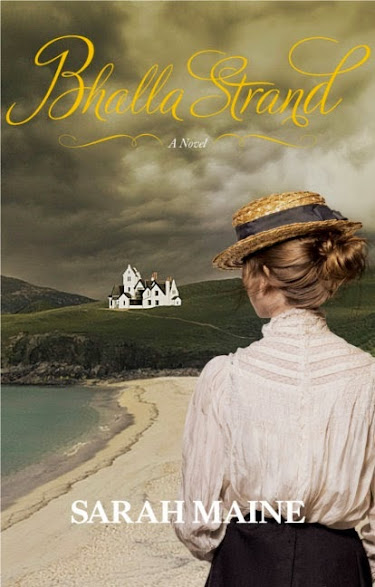 On the scarcely populated islands of Scotland’s Outer Hebrides islands, lies the deserted remains of a once great house–Bhalla House.

Hetty is grieving the loss of her parents as well as her grandmother and is toying with taking Bhalla House, which she just inherited, and turning it into a hotel.

But before she can make any decisions, she travels to the remote island looking for something, though she doesn’t quite know what. Something right perhaps?

When she arrives things are worse than she imagined. Hetty thought she would find an Edwardian era mansion that needed little more than some updating. What she found was a crumbling ruin that would cost millions to repair.

While tending to the house, contractor and caretaker, James Cameron, stumbled upon human remains under the floorboards of the house. It appears the body came to sinister end, but quite some time ago.

Just as he is leaving to find the authorities, he runs into the new landowner herself–Hetty. James has heard she wants to turn the house into a hotel with shooting parties. The nearby bird sanctuary will likely fight that, not to mention the remaining tenants will not leave their land without a fight.

When she first sees the house, Hetty falls under it’s spell. The island and the house itself work their magic on her and soon she begins to feel deeply connected to it.

When she hears about the remains she and her unlikely companion, James, begin unraveling a tragic family mystery that goes back 100 years.

In 1910, Beatrice and her new husband, the famous painter Theo Blake, arrive at Blake’s estate on Bhalla Strand. Blake longs to reignite his artistic talents and having grown up on the island, he feels connected to it and thinks this summer vacation will be just what he needs.

Beatrice barely knows her husband but she can quickly see how he loved Bhalla House and the island. It’s enchanting, wild, and free….completely liberating and refreshing. But almost as soon as they arrive she notices a change in Theo….a dark inner turmoil that she cannot figure out.

The caretakers son, Cameron, assists Blake with his books the running of the estate, but he begins spending more and more time with Beatrice and finds her oddly intriguing and intoxicating.

A simple kiss will have tragic consequences for all of them in this tale of family secrets, lies, deception, and passion and of murder most foul.

When I was asked to review this book, I was intrigued by the summary but put it down on my review schedule for much later this spring. However, there was something haunting about the cover and the summary that kept needling at my mind. As a result, I started the novel much much earlier than anticipated….almost immediately after I got it.

I literally read this book in a day. It was utterly fantastic! I love a good Gothic romance and this had all the things that I love in Gothic novels…..crumbling estates, forbidden/tragic love, ruined families, fall from grace….everything!

It was wonderfully atmospheric and rich in symbolism. The author really utilized the landscape, weather, and wildlife to her advantage. The landscape for my was a key figure throughout the novel, it was almost a character unto itself.

The island and it’s wildlife and tides were home to me by the end. I felt like I was right there on the shores in every page. I want to go to these islands now and breath in the magical salty sea air.

Beatrice was the perfect Gothic heroine. I adored her and loved reading her story. I would have liked to have seen more romance earlier on between her and Cameron but overall I was satisfied with it. The tension between the two could have been stronger but by the end I was sold on them as a couple.

Same with Hetty and James,  I would have liked to have seen more tension and romance earlier on but again I was satisfied by the end.

There were parts of the novel I wasn’t entirely in love with. For example, I was confused by the land issues and disputes and the constant battle between all the families over the land was entirely lost on me. I suppose it’s something so ingrained in the Scottish and Irish cultures it must seen straight forward, but I am not up on all that so I found these sections a little tiresome.

However, that didn’t dissuade me in anyway from giving this novel 5 stars. I loved it! It was a fast read and engaging from the very beginning. I loved the rich mystery and the intriguing family secrets and lies and the Edwardian era was the perfect setting for this novel.

The Edwardian era is the twilight of the old world….the glitz and glamour of the world are ending and war is on the horizon that will change the world even all the way in the most remote location in Scotland—even at Bhalla House.

This book is a haunting read….it will stay with you long after you finish it. It’s wonderfully rich and beautiful Gothic-esque novel with lots to love, particularly for fans of Gothic romances.