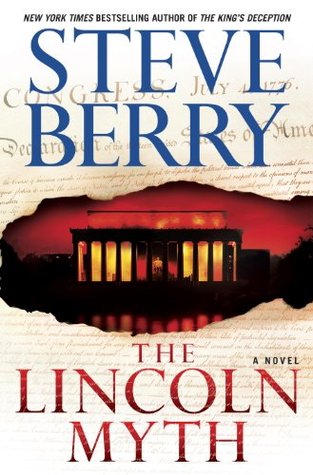 All is not as it seems. A simple phrase that could be dangerous in the wrong hands.

Abraham Lincoln must make a choice, keep the secret or not. He could save thousands or have the country torn apart…..Lincoln alone holds the power.

Retired agent, Cotton Malone is asked by his former boss to do a favor.

It sounds relatively cut and dry, but as soon as he agrees he realizes this is a bit more involved than he originally expected.

Unbeknownst to him, his girlfriend is also being recruited for this ‘favor’. This only complicates matters further as she is in deep cover.

At the heart of the novel is a plot to unhinge the United States that is coming from an extremist Mormon group. The leader of this group has sparked a heated debate between a US Senator and the White House.

In Denmark, an agent has gone missing held captive by a religious extremist. With Cotton on the case now, he must untangle this mess with its roots deep in American history.

Suddenly Cotton’s quiet life in Copenhagen is completely disrupted and he is dodging bullets and trying to solve a mystery that threatens the country he spent years serving.

My first encounter with Cotton Malone was with the book, The King’s Deception. Though I have read the series out of order, I don’t think it’s hindered my opinion of it at all. There were some references of course that I didn’t quite catch because they were to past events but overall I didn’t feel lost or like I didn’t know what was going on.

This latest installment was not as gripping for me as the last Cotton Malone book I read but for one reason alone: Cotton’s girlfriend Cassiopeia. There were tons of action sequences, intrigue, mystery, history, and thrills to hold my interest without question, but Cassiopeia’s character was off for me.

In the previous book I had read, she didn’t play a huge roll at all. However in this book she was much more involved in the story. Having not read the other books in the series, I can’t speak to how she was in other books, but in this one she just seemed ill suited for the things she was doing. I have read other reviews that thought the same and I agree, she seemed out of place and out of character.

I liked the pace of the novel. As with the previous book, things clipped along nicely and held my interest. I was never bored and there was a pleasant ebb and flow to the action, story, and historic aspects of the novel. Very much in line with Dan Brown’s novels.

I loved how we got to see many different places in this novel, not just the US–Copenhagen, Salzburg, Utah….that kept things interesting and moving for me.

Historic thrillers are always such a treat for me. I love how stimulating history can be, this is something Steve Berry is wonderful at–mixing history with suspense. I liked the Mormon angle, though I wondered if it was ‘intriguing enough’ to bring Cotton out of retirement initially, but as the story wrapped up I thought it was interesting and satisfying.

Berry does with the Mormon religion what Dan Brown does with the Catholic religion, he examines it from a different perspective. Regardless of what you believe religiously, I think readers will still find the novel  controversial but still engaging and exciting to read.

While there were aspects of the novel that I didn’t care for, I thought overall the novel had solid structure, lots of action, and intriguing history and religious based plots. If you are a fan of Dan Brown’s Robert Langdon series, then you will love Cotton Malone!

When I read Berry, I think of controversial plots in history, fast paced direct story telling, and a constant keep ’em guessing plot. And in this latest novel he does just that.