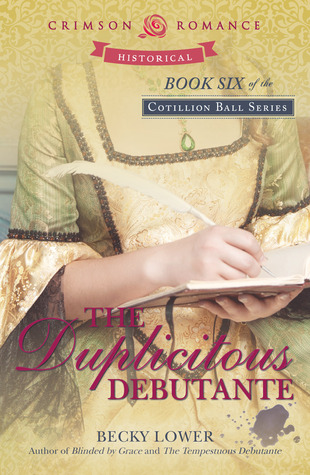 New York society in the 1850’s, expects women to find a good husband, set up a functional home, and of course….have children.

But Rosemary Fitzpatrick has other plans, the last thing she is interested in is entering society and beginning the great husband hunt!

Rosemary has other ambitions which include writing the popular Harry Hawk dime novels. But it’s an age that frowns upon female writers and thus Rosemary writes as the gender generic, F.P. Elliott.

Rosemary and Henry work closely together and soon fall in love but his family is very traditional and they are unlikely to accept her as a suitable wife for their son. It’s already a stretch for Henry to marry a working class secretary, but when he finds out she has been deceiving him about her true position, it could cost them their love.

Though this book is part of a series, I thought it read fine as a stand alone. I didn’t feel lost or like I was missing anything from the previous books. Though after reading this one, I think it would be fun to read the others in the series.

There was a lot that worked for this novel for me. I loved the chemistry between the Rosemary and Henry. They were each such strong characters on their own that when they came together their chemistry was a force to be reckoned with.

The setting and the little attention to the historic details all worked well for me. The author does a wonderful job with the historic facts and events which added to the story but didn’t distract from it. She added in a lot of details about fencing which I thought were knowledgeable and again, added to the plot and characters. It’s clear that she knows a lot of about this period in American history.

As a side note, I am also taking a graduate level course on American history through the Civil War so reading this novel set in the period we are reading about in the class was an extra special treat for me. It was fun to interact with history both academically and for fun while reading this novel.

The only thing that I thought didn’t work for this story was the general plot. I feel like I’ve read a lot of stories about the independent, head strong woman trapped in a world of oppressive sexism and longing to escape and be free to marry who she choose.

Girl meets enlightened man who wants a fiery bride who will excite him. I don’t know I just feel like I’ve read a lot of similar plot lines and though it works in many cases at times I guess it begins to feel a little old or overused to me….granted it works and it’s a great formula or it wouldn’t be used as much as it is but for it to continue to work the author needs to bring something else to the table like great characters, plot twists, or significant details etc.

That’s not to say that I didn’t enjoy this novel, because I did, but the plot just seemed a little predictable to me. When I see a common theme in plot lines like this, I rely on strong characters to hold my interest and on that note the author delivered. The characters were what made the novel for me.

The characters and their unique personalities kept me interested. I genuinely cared about them and what happened with their romance. The author really incorporates the characters unique traits into the narrative. For example, Henry loves fencing and that love of fencing is used as a metaphor for their relationship. I thought that was a fun and effective tool in the narrative as well.

I was engaged and intrigued by the characters from the start, while this was an easy read it had a lot to enjoy and hold the readers interest throughout.

Last but not least, I don’t think the cover does the book justice. For characters with great chemistry, the cover didn’t convey that to me. It seemed bland and nondescript. I think something more eye catching would help engage a wider audience.

I reviewed this book as part of the The Duplicitous Debutante virtual book tour hosted by Historical Fiction Virtual Book Tours. Be sure to visit the other blog stops on the tour for interviews and giveaways!

Monday, October 13
Review at What’s On The Bookshelf