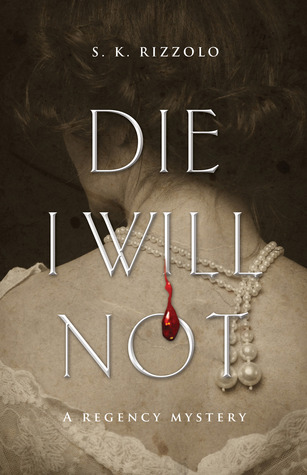 British mysteries are some of my favorite books to read….especially those set in either the Victorian or Regency eras. Who doesn’t love a good murder by gaslight novel?

The John Chase series intrigued me. I often gravitate toward British mysteries/detective novels with female protagonists, so a series that boasted a male detective grabbed me.

Penelope Wolfe has married the wrong man. She tried to break away from her father and in her attempt at ‘independence’ she has found herself very unhappily married. Jeremy is basically gambling himself into the ground.

Penelope’s father has also fled to Italy after publishing letters in a paper under the name “Collatinus” attacking the Prince Regent and he is suspected of murdering a women. Now a new Collatinus has emerged and Penelope fears that she will be implicated in the letters.

Unable to count on her husband for support, she turns lawyer Edward Buckler and Bow Street Runner John Chase for assistance.

I have not read any of the other books in this series but from what I gather, Penelope is also in the other books and are the Edward and John (obviously). I didn’t feel overly lost in the book, but it was clear that this was a series whose characters had history together.

Rizzolo did a nice job at orientating the reader within the series. I felt like she gave enough back story for those reading this as a standalone to navigate the story and bond with the characters.

What I liked most about this series is it’s not a cozy….it’s an intelligent read with complex characters. As a reader, you have to pay attention for plot clues….this mystery is definitely a puzzle so you need to be an active reader.

I also liked that this mystery had a foot in reality as well! An editor for the Tory paper, was assassinated for writing an article about the Reform Act of the 1800’s. I thought this added a lot of authenticity and historic interest to the mystery.

I thought Rizzolo’s descriptions of Regency England were pretty spot on and historically accurate. She was very descriptive and I felt like I could see everything clearly in my mind. Her prose was descriptive without being showy or thick….it had balance.

But Penelope alright as the protagonist. She was intelligent and strong willed which seemed like of predictable for me but I did like her just find even if she was a little cliche. Edward and John were also likable, but I would say nothing really set them apart for me. They were just average, though they worked well together and were enjoyable, I just wasn’t blown away.

If you are a historic mystery fan you will probably like this series. I enjoyed it and thought that it was a smart series. If you are looking for a fluffy cozy this isn’t for you….this is a more serious, thinker mystery. I would gladly read the other books in the series, I think the series overall has major potential!

Die I Will Not Blog Tour Schedule

Monday, November 17
Review at Back Porchervations

Tuesday, November 18
Spotlight at Passages to the Past

Wednesday, November 19
Interview at Back Porchervations
Spotlight at Flashlight Commentary

Thursday, November 20
Interview with Curling Up With a Good Book

Monday, November 24
Review at Oh, For the Hook of a Book

Tuesday, November 25
Interview at Oh, For the Hook of a Book

Wednesday, November 26
Review at Buried Under Books
Review at Book Babe (The Rose in the Wheel)
Spotlight at Layered Pages

Monday, December 1
Review at WTF Are You Reading?

Thursday, December 4
Review at A Chick Who Reads
Spotlight at What Is That Book About