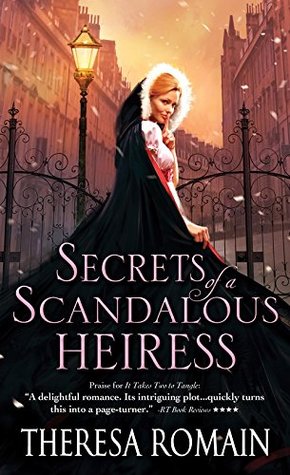 Augusta Meredith is creating scandal all over the place.

She has not only suffered and embarrassing and tragic love affair but she is also not mourning the death of her parents as society would expect.

She has fled to Bath where she assumes an identity to find herself a lover. While in Bath, she runs into Joss Everett who recognizes her, but he promises to keep her secret if she keeps his.

Joss is in Bath trying to locate a blackmailer for his cousin, who also happens to be his employer. Though Augusta propositions him to be her lover, Joss respectfully declines as he has his own agenda.

But the two decide to work together to at least discover the identity of the blackmailer.

The attraction that Joss begins to feel toward Augusta is surprising. He’s not there to find a women but then again Augusta is a rather tempting distraction.

Augusta knows that she shouldn’t be attracted to Joss but for some reason she is. She enjoys his wit and charm. She can have genuine, intelligent conversations with him and because of that he becomes instantly more attractive to her.

Both are drawn together by desire but outside circumstances are working against them.

This was a hard one to review because I couldn’t just pin down one thing that wasn’t working for me. I think the biggest one was that I didn’t really connect with either of the characters. I wasn’t a fan of Joss, he was a little too cold and aloof for my tastes so I had a hard time feeling an attraction to him as the love interest.

As for Augusta, I thought the assumed identity piece was flimsy and I wasn’t sure that it really added anything to the story. For me I actually found it more confusing and distracting. There wasn’t anything that really stood out for me about Augusta either….she was your typical heroine but again there was nothing about her that I would consider memorable.

The plot was different…..I guess I would say that I was neutral about the plot. It was ok, like I said….different….but not riveting. I liked the idea of a mysterious secret blackmailer but I was a little disappointed that Romain didn’t run with it a little more. I thought there was potential there for a stronger story line and I was hoping that she would have elaborated more on this aspect of the story, but it was satisfactory.

For me the plot and characters just didn’t mesh like I was hoping. The story lacked a natural flow for me. I was often wondering how things related or why things were happening in the way that they were. I struggled with this one in places but I wasn’t totally ready to throw in the towel and not finish it because there were things about the story which were enjoyable.

I noticed half way through that this book was part of a trilogy which could be the reason this book didn’t flow for me….or why things seemed to be too ‘familiar’.

By that I mean in the beginning when Joss and Augusta meet for the first time I was like hummm they seem to know each other and there was no back story connecting them. As the book went on I was like am I missing something here? That’s about the time I realized this was a trilogy.

So that said I would hate to judge a book based on the fact that I haven’t the others but at the same time, I felt lost in this book. Most of the time authors give a bit of a background on the characters/story for people who are reading the books out of order but that wasn’t the case for this book. I felt lost.

The cover was interesting. I really like that it wasn’t the typical ‘harlequin romance’ style cover. I liked that it didn’t feature a man with the ‘lady’. That suggested to me that the heroine was going to be more independent and different than the typical romance heroine. I thought the cover gave a different take on the typical romance novel and in this case it totally worked. Plus I love the long black cloak.

Bottom line….it wasn’t an overly enjoyable book but it was alright. I might give one of her other books a shot to see if maybe this one was a fluke. Overall I think I was just expecting something that flowed better I guess.

It was….ok but it was definitely wanting in a lot of areas.

Book: Secrets of a Scandalous Heiress (The Matchmaker Trilogy #3) by Theresa Romain