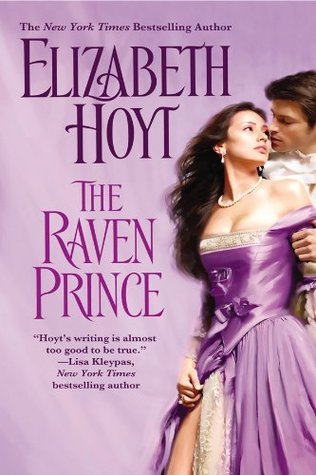 I’ve recently read some pretty heavy novels so I think it was long over due for a fluff fest!

With December being so chilly and long, it often ends up being my steamy romance month. This month I’ve read a lot of historical romances of the ‘bodice ripper’ persuasion…and not necessarily on purpose.

I’ve never read anything by Elizabeth Hoyt so I didn’t really know what to expect.

She has been recommended to me by other historic romance fans and after looking through some of her titles, The Raven Prince caught my eye. I think mostly because I liked the title, it sounded interesting and it sounded almost like a fairy tale.

The widow Anna Wren needs to find a job, and quick as she is in dire financial straits.

The Earl of Swartingham also has a need…..he needs a secretary. Though the position is typically occupied by a trained man, the Earl will take anyone.

After taking Anna on as his secretary, the Earl begins to see her in a different light. Though she isn’t overly fetching, it’s her fierce personality draw him to her. He can’t stop thinking about her, though he tries hard to block his desire.

Anna’s husband has been dead for six years and for six years she hasn’t known another man. There is something about Edward, the Earl of Swartingham, that she finds attractive.

He isn’t overly handsome….in fact he has small pox scars all over his face so he is far from what most would call traditionally, ‘handsome’. But there is something that Anna feels burning within her that attracts her to the Earl.

As their mutual attraction grows, the Earl tries to fight it. He even goes so far as to away to London to take his pleasure at a high end brothel. But when Anna catches wind of this, she follows him and disguises herself as a woman of the night and takes the unsuspecting Earl as her lover.

It was very evident that this was going to be a bodice ripper from the beginning. With those type of romance novels, I rarely expect a lot when it comes to plot. However, I was pleasantly surprised that this novel has a decent plot.

Some things were a little random and not entirely necessary, but the overall plot wasn’t bad. It was almost like a cross between Jane Eyre and Beauty and the Beast. Two imperfect characters both physically and in background….that have both suffered hardships and disappointments….come together to find love.

While the plot was surprisingly well done and interesting, the part where the novel fell short for me was the attraction between Edward and Anna. While the sex scenes were super hot (more on that soon), I struggled with their mutual attraction.

Though they were attracted to each other sexually, a bulk of the novel was about their love for one another and I just wasn’t entirely convinced. The author did a lot of telling but not a lot of showing when it came to them falling in love. So for me that part of the book was wanting.

The other things that bothered me in this book were the excessive amount of characters. I felt like there were just too many different characters coming and going in the books which was distracting.

I loved that Hoyt went against the grain a little with this book. A lot of historical romances have a virginal heroine that meets a Duke (or some other titled man) and they fall desperately in love and consummate their love once they are married. I like that this wasn’t the virginal heroine….she was experienced, maybe not in passion, but she wasn’t innocent which I liked.

I liked that she went after what she wanted….showing up at a brothel to hook up with her boss even if it’s in a disguise and in secret….UMMM yes please! This was BOLD and I liked that about her writing style. I would absolutely read the other books in the series (or by her in general) based on the fact that she allowed a woman as much passion and unconventional-ism as the male leads in romance novels.

I actually ordered the second book in this series, The Leopard Prince, on my iPad because I was so intrigued by her books and writing style. While this book didn’t earn a four or five star rating from me, it’s not because I didn’t enjoy it.

I gave it a three start rating because it has some rough parts…..excessive character, random plot developments, and the love part to Edward and Anna’s relationship was a little off. But it was overall very good and filled a desire I had to try a different genre that I have shied away from over the years.