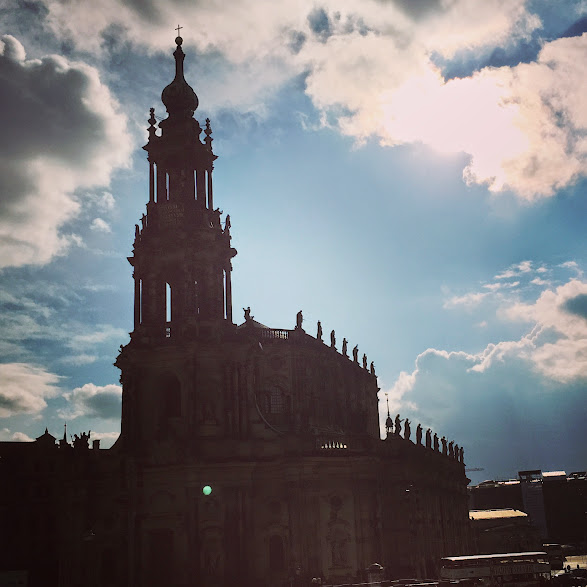 Well it’s finally here, our last official day abroad and we are heading to Germany. Sam and I really debated between Vienna and Dresden Germany for our one long day trip.

We went with Germany simply because it was a closer drive and I am glad that we did that because Dresden was only about an 1.50 drive one way while Vienna was more like 3 hours one way.

So in the end Germany won out. Our tour company was supposed to pick us up at our hotel at 8:15……well that didn’t happen. It was more like 8:45 and our tour bus was supposed to depart at 9…..and we had to pick up yet another person, traffic in Prague is ridiculous so we quickly realized we would NOT be making the 9:00 am Germany bus departure.

So, as we waited in traffic with our driver I started thinking about alternative options for the day….just in case. And honestly I wouldn’t have been sad to have another day to do whatever we wanted around town. The last two days had been so nice for us to just be left to our own devices.

Well we finally made it to our tour company meet up spot at 9:20, and I was fully expecting the company to just issue us a refund and then have a free day to do whatever…..luckily they had a private car waiting for us to take us to Germany.

So our driver was very nice and above all he was quite. The thought of being in a car 1.5 hours with a strange man who would probably talk us to death was simply not something that I was looking forward to so thank GOD he wasn’t chatty.

The drive to Germany was beautiful and the driver filled us in briefly on some background info about Dresden and Prague. During WWII Prague was bombed by the allied forces by mistake…..they thought they were bombing Dresden and ended up bombing Prague instead…..talk about a major oops.

Many historic landmarks not to mention the city, were all completely destroyed during the bombings. After the war, the city would have to rebuild almost everything.

For instance, the Dresden Cathedral, also known as Cathedral of the Holy Trinity, was badly damaged and was not fully restored until the 1980’s. The Semperoper opera house has been rebuilt multiple times over the years, most recently after the bombings and it too didn’t re-open until 1985.

The Dresden Frauenkirche, a Lutheran church, was completely destroyed by the bombings as well and it wasn’t reconstructed until 2004/2005! So clearly that even though this city was a like a phoenix from the ashes restoring itself….the restoration process has taken decades post WWII and millions of dollars to complete.

So we arrived in Germany in record time……the no speed limits thing is frankly a little scary but you do get places FAST! We had no idea what was in store for us in Dresden knowing next to nothing and assuming that we would be part of a tour group…..we figured we would not have to plan.

Well we did have to plan at least a little bit of this side trip. Our trip included admission to their art museum, the Zwinger. The Zwinger is actually a converted palace which was originally built in the 15th century….though the Zwinger was also destroyed in the bombings, it was one of the first buildings to be rebuilt with it’s constructing being complete by the 1960’s.

It’s kind of like the Louvre but on a smaller scale. Our guide said it would take us about 2-3 hours to get through everything at the Zwinger which meant we had quite a bit of time to roam Dresden on our own.

Our guide took us through the ‘historic’ district which is right next to the Zwinger and pointed out a couple of historic sights and told use that we should try definitely try and go into Dresden Frauenkirche because it is only open to the public at certain times of the day and during the week.

The day we went it happened to be open which was very fortunate. So after a quick orientation of the area he was like ‘ok bye have fun meet you at the car at 4:45’!

The Dresden Frauenkirche didn’t open until 1 and it was only 11:30 so we had some time to walk around. Well it looked like it was going to rain and I was hungry so we ducked into a konditorei (German for cake shop) for some coffee and a pastry.

Having been in Prague, we got spoiled because most everywhere we went everyone spoke English…..I just assumed it would be the same in Dresden because it is a fairly touristy town. WRONG.

So I asked the shop girl for a coffee and an apple strudel and something for Sam…..and she looked at me like I had 5 heads. So I asked her again slowly…..very s-l-o-w-l-y. Nothing.

I pointed to the strudel and she’s like ‘strudel’…….ja! And I was like ummm…..coffee, another pastry, and water. She just stared at me. I’m like English? She’s like no. Of course. I literally had a flashback to France…..doesn’t anyone speak English?!?! After some serious pantomiming and pointing we got more or less what we ordered.

Let me just say, the strudel……TO DIE FOR! It was super fresh with a flaky crust and just the right amount of tart apple and sugar. I wanted like 10 more but I didn’t feel like miming anyone…..once was enough for one day!

After we snacked we wandered around the historic area until the Dresden Frauenkirch opened, which we didn’t have to do for long. The Frauenkirch is a very unique sight in Dresden, specifically because of its opulence and grandeur, something completely unheard of in many protestant faiths.

The reformer, Martin Luther, actually spent a lot of time in Dresden during the Reformation and was greatly influential in the city it self. This church has a statue in front of it commemorating his influence in the city.

We were able to get into the church right on time and take in all the beauty of the alter. It was so colorful and bright inside…..and they did such a good job restoring it, you would never have known that it was actually redone so recently!

There were no tour guides and there weren’t too many that spoke English….if the ushers spoke English it was limited. We wanted to climb their bell tower to take some photos from the top but it was 9 euro (about $10.00) to do that per person and they were cash only! We had done plenty of walking so we passed on that hike.

After that we followed the Fürstenzug, a large porcelain mural 334 feet long depicting all the Saxony rulers since the 12th century….a stunning display of artwork to say the least!

We ended up at the Dresden Cathedral which was surprisingly bright and very modern inside. Not modern like 20th century modern, but the color scheme (light grey and white) was very different and striking that it almost shouted ‘modern’ but I loved it.

Most cathedrals are so dark and dreary inside with little light….this was bright and refreshing. From the outside it looks like a typical cathedral…..gothic. Inside was a pleasant surprise.

Again the cathedral didn’t have a tour guide so we just basically wandered on our own so the visit was relatively short. We headed to the Zwinger next.

The guards at the Zwinger in their extremely broken English told us we couldn’t have backpacks in the museum. So we had to find a place to store Sam’s backpack.

They have lockers but you have to pay and since the Czech Republic isn’t on the Euro…..we had no Euros nor were we going to find an ATM and take out 20 Euros for some change.

So what to do? Fortunately there were some nice ladies at the coat check who said they would watch his bag free of charge.

We started with the Old Master’s gallery. It displays around 750 paintings from the 15th to the 18th centuries, including works from the Italian Renaissance as well as Dutch and Flemish paintings. The Zwinger boasts a, Raphael: Sistine Madonna, Johannes Vermeer: Girl Reading a Letter at an Open Window, and my personal favorite Jean-Étienne Liotard:The Chocolate Girl.

Unlike the Louvre, we could actually look around and enjoy the paintings without bumping into millions of people. It was crowded but not unreasonably crowded.

Next we went to the Porcelain collection, which sounded completely lame (I’m not a glassware fan…..at all) but this was actually very interesting. They collection was extensive including many Asian pieces and Meissen porcelain which Dresden is most known for. My favorite was the hall full of life sized porcelain animals.

Next we went to the Royal Cabinet of Mathematical and Physical Instruments which includes historic clocks and other astronomical artifacts with historic significance. This was the busiest exhibit in the entire museum and probably the most unique. It was hard to really look at anything for a long period of time simply because there were so many people.

What I’ve since learned is this exhibit contains one of the most significant collections of around clocks (3,000).  Some of the collection’s highlights are the Arabic celestial globe of 1279, a calculating machine of around 1650 once belonging to Blaise Pascal and the orbit clock manufactured in the 1560s by order of the court of Dresden.

After this we basically were done. Sam and I love museums and such, but it’s hard to see every little thing and take it all in unless you were going to spend the entire day which we obviously weren’t. We tried to get in the highlights and for me the one thing I wanted to see was The Chocolate Girl, after that everything else was just a bonus.

So once we got through the museum (about 2 hours), we still had some time to look around the city. We retrieved Sam’s backpack and took a few more pictures from the Elbe river…..then came the rain.

By this point we were tired, cold, and wet and totally ready to head back home. We returned to the car early (only 15 mins) and drove back to Prague.

The drive back was equally pleasant, Sam took a nap, and I basically zoned out and enjoyed the countryside and scenery. When we got back our guide thankfully dropped us off near our hotel so we didn’t have to make the 2 mile walk from the official tour drop off point (I loved him for that!).

We were of course hungry…..and we stopped at the same Italian restaurant to celebrate our last night in Prague with….more pizza and some Czech beer. By the time we were done with that we were ready to go back to our room and crash. A perfect way to end our stay.