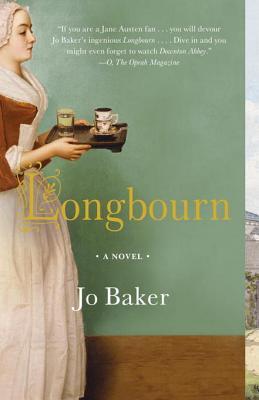 Reader beware…..if you love Jane Austen and are looking for something that will give you a new ‘perspective’ about the Bennet sisters, keep on looking.

Sure this novel includes the Bennet sisters and follows the traditional Pride and Prejudice story but that’s about it.

Jo Baker remakes the classic story of Pride and Prejudice from the perspective of the below stairs staff but yet it’s a story all its own and noting close to the Austen classic.

Sarah has been a maid at Longbourn since she was a child. She cleans the chamber pots, scrubs the laundry, polishes the floor and of course waits on the Bennet sisters.

Her life has pretty much been all about cleaning up after the girls. She has never even left their village let alone had a love interest.

When a mysterious footman arrives at Longbourn, Sarah is instantly drawn to him and hope he will notice her. To her disappointment he basically ignores her.

Soon after the arrival of the new footman, James, the Bingley’s arrive at Netherfield with their staff and bring an exotic servant with them. Sarah’s head is turned by this new servant who actually gives her attention while James continues to be elusive.

James fears that Sarah will be led astray by this new servant, ruining her reputation. He has grown very attached to Sarah during his short stay at Longbourn but he has his own secrets that prevent him from taking an active interest in her.

This is marketed as a Pride and Prejudice meets Downton Abbey mashup…..I would say that yes this concept can be loosely applied but it just didn’t work as well for me as I had hoped.

This novel was a disaster for me. The first half was actually ok and I was fine with it being a little more gritty and edgy than the traditional sugary sweet Pride and Prejudice, but the second half of the book was a mess.

I enjoyed it all the way up to about 40% of the way through. James was brooding and mysterious and I liked that unknown element about him. I also liked the easy banter between Sarah and the other servants like Mrs Hill, Polly, and James. Sarah was inquisitive and likable which worked well.

I really liked that the P & P story line was more of a back drop, letting this story take front and center. I loved her depiction of Mrs Bennet….I thought she was spot on in her mannerisms and responses. Clearly Baker loves P & P and put a lot of thought and care into their characters.

Her writing style was polished and to the point. I thought she did a great job with her descriptions and dialogues…..but where things started to go bad for me was the direction of James’ story line in the second half of the book.

I don’t know but things just got weird in that second half. I was ok with the random black servant at Netherfield and Wickham being a bit of a deviant….I was even marginally ok with how Elizabeth was portrayed…..I just couldn’t rationalize James’ story, period.

Not in any way shape or form. I started losing interest at about 705 of the way through but since I had come so far and spent my own money on this one, I felt obligated to keep reading even after I lost interest in the story.

I was expecting this novel to be the perfect mixture of Downton and P & P as promised….more of a love story in the spirit of Jane Austen and Lady Mary……it was a little more gritty and rough around the edges. I liked that Baker wanted to go with an edgy rendition but it was just too much for me.

I did love the cover though! That painting (The Chocolate Girl by Jean-Étienne Liotard) is a particular favorite of mine so I was in lust over the cover design of this novel. The pastels made me think I was going to read a cozy love story.

Overall, I so wanted to love this and I know that many people and friends of mine in the literary world loved this book but it just wasn’t for me. I gave it 2 stars because the first half was decent but I couldn’t bring myself to give it anything higher than that.