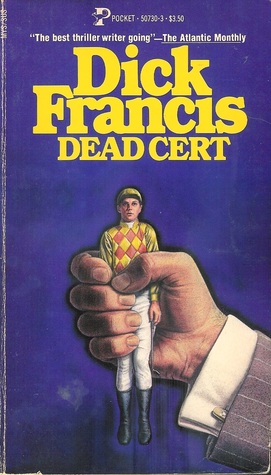 Horses and murder in the English countryside…..how can I resist a book like that?

Jockey, Alan York, is riding in a steeplechase race when his long time friend, Bill Davidson, takes a terrible fall over the last fence.

Alan finishes the race in first place and rushes back to check on his friend. Bill is quickly taken to the hospital but it is too late, he is dead. Alan examine the fence where Bill went down and discovers the remains of a wire, indicating that the fall was anything but an accident.

The dark world of horse racing and bookmaking is one that Alan is familiar with. He knows the dangers of ‘stopping’ a horse intentionally during a race, he knows that the horse racing world is full of unsavory characters but he also knows that his best friend Bill, would never enter into anything dishonest which makes his death even more of a mystery.

As Alan digs deeper into Bill’s death, he puts himself in great danger…..what happened to Bill could easily happen to Alan and it would look just like an accident.

Author Dick Francis knows his horses and steeplechasing, that much is evident by this book alone. Dick Francis was a jockey himself so his flair for horses comes naturally in this book. His ability to explain the racing world and speak authoritatively on the subject really made this book realistic and serious. Sometimes I have noticed some authors tend to over research their topic and it can come across as overkill and boring, while others don’t research a topic enough making it seem flimsy and lackluster. Francis paired his knowledge and experience in the sport perfectly making it easy for a non horse person to follow. Well done!

Even though this book was written in the 70’s, the time period seemed a little ambitious to me which I found distracting in some ways. There were things mentioned like cable wires but then they would talk about telephones. Other times they would talk about WWII and then they would talk about the Edwardian era. So I was a little distracted trying to decide when this book was supposed to be set. I guess it ultimately didn’t matter to the over all story but for me I was curious and distracted by it…..if I had to guess I would say late 1950’s. That was the reason I gave this one 4 stars….for some reason I was so distracted by the time period ambiguity and I just would have liked to have known….clearly I’ve been reading too much historic fiction.

What I liked was that all the pieces of the mystery were more or less presented to the reader right away but we had to try and put them all together and see how they fit. I really enjoyed that aspect of the novel. I also liked that we got into the murder right away!

Some murder mysteries wait a few chapters so that the reader is introduced to all the characters and gets to know everyone before something happens. While that is all well and good, it’s nice to just get right into things and get to know the characters throughout the book instead.

The murder happened literally like on the first or second page and then we got to know all the major characters after the fact. I really enjoyed that. I also liked that the main character, Alan, wasn’t your typical ‘arm chair’ detective. He had a day job and a hobby job….neither of which included being a detective. I thought that was different and refreshing.

I also thought it was interesting that Francis included a little love interest in this book and I actually thought it was a little ‘racy’ by even the 1970’s standards in mystery novels. Alan was living with his best friend and his best friend’s wife but nothing was happening between them…..????……Ok I’ll buy that…..and then his love interest with Kate and him discussing how he would love to throw her in the back of a horse box and have at it with her…..ok I’ll buy that too but all this seemed rather salacious and intriguing even by modern standards. I loved that Francis included that in this book because it made Alan seem all the more ‘real’ and relatable especially for male fans. Personally, I was hoping he would hook up with the widow.

Anyway, I really enjoyed this mystery. It was just what I needed after coming off of the lengthy read Les Miserables! You don’t even need to like horses to enjoy this book but if you do, you will find it an extra special treat to have horses so predominantly featured in this mystery! I would certainly read more by Francis in the future, he gets right down to business and doesn’t fill his books with unnecessary fluff! Great mysteries!