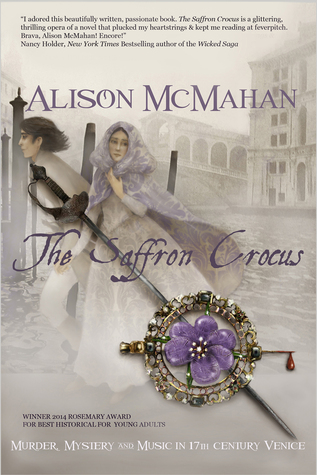 In 1643 Venice, singing teacher Margherita introduces the young Isabella to the world of opera.

Isabella has wanted to sing in Monteverdi’s Choir but it’s only for boys.

But opera opens up all kinds of new doors for Isabella instead…..all thanks to Margherita.

Just when things are going well for Isabella, she finds Margherita murdered.

Isabella sets out to discover why…..but soon secrets start surfacing about Margherita’s past and her handsome son, Rafaele, might be the murderer’s next target.

Isabella and Rafaele team up and try to solve the murder before it’s too late! But when an attempt is made on Rafaele’s life, she suddenly finds himself arrested for a crime he didn’t commit.

Isabella must solve the mystery before Rafaele is wrongfully executed!

At just a couple hundred pages, this book is a very quick read. This book alternates between Isabella’s POV and Rafaele’s POV which actually worked nicely as both POV’s complimented each other.

Isabella, though younger than most heroines that I read, is very determined to not only solve the murder mystery but to also overcome any challenge in her path. For being only 15, Isabella is mature and grows as a character.

At first I struggled to connect with her just based on her age etc but I liked that she was a little ‘older’ for her age and grew throughout the story. She was also a ‘realist’ which I can appreciate. In the end, I respected her and found myself cheering her on in the story.

I struggled to identify or connect with Rafaele at first. For me he wasn’t as complete or as well constructed as Isabella for some reason. It wasn’t that I didn’t like him or that he was flat, but he just wasn’t as strong as Isabella, but I did enjoy reading from his perspective nevertheless. I thought his character offered the reader a unique glimpse into the historic period and how men fit into society.

The immersion into the historic period was an unexpected treat! I wasn’t prepared for there to be so much historic details and vivid descriptions of the music. I really loved that aspect of the novel. McMahan clearly loved the period and did research about the music and setting which really made the book blossom for me!

The mystery and intrigue were well constructed and there were enough twists and turns in the story to keep the reader engaged which isn’t an easy fete for a book this short. I was impressed by the details and plot twists within this short novel, she did a marvelous job holding my attention!

This book is categorized as a YA novel, and I would agree with that but I think this book has the ability to appeal to a wider audience. I think younger teens would enjoy it since Isabella is on the younger teen side, but she is ‘mature’ enough to appeal to older teens as well and I think adults will enjoy the historic elements as well as the snappy plot.

Tuesday, April 21
Review at History From a Woman’s Perspective

Wednesday, April 22
Guest Post at History From a Woman’s Perspective

Tuesday, May 5
Review at Book Nerd

Wednesday, May 6
Review at Just One More Chapter

Friday, May 8
Guest Post at Just One More Chapter

Thursday, May 14
Review at Book Babe
Guest Post at What Is That Book About

Friday, May 15
Review at The True Book Addict

Thursday, May 28
Review at The Lit Bitch
Review at Satisfaction for Insatiable Readers

2 thoughts on “Review: The Saffron Crocus by Alison McMahan”

Leave a Reply to A Well Read Woman Cancel reply