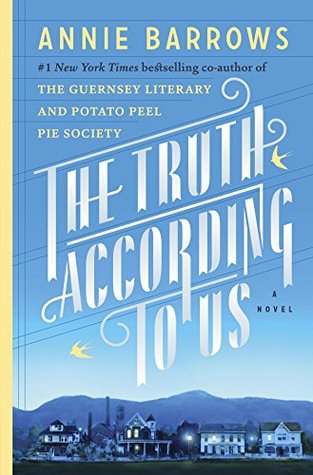 In the panhandle of West Virginia, Layla is cut off by her wealthy family in the middle of the Great Depression.

She is forced to find a job with the Writers Project writing the history of Macedonia, a small town in West Virginia.

While working, she will board with the Romeyn family and where we will meet two other main characters:  Jottie and Willa.

Layla’s assignment is to write the official history of the town, she learns there are plenty of secrets in the town, not to mention plenty of colorful characters. She begins investigating the town and her inquiries force the Romeyn family, as well as the town, to face some painful memories.

Told through letters and research about the town, this story unfolded like a set of nesting dolls. Just when you thought the story was over, another piece was revealed…again and again. This was a great, complex story. On the surface it seemed straightforward and simple but the more I read, I was treated to a plot that slowly unfolded to reveal more and more of itself. I appreciated how the story developed but there were things that made it a little slow to read.

While I really enjoyed the complexity of this story, I wasn’t a fan of the alternating POVs. I think that most of the story could have been told through Willa and Jottie’s POVs and Layla could maybe have been more of a secondary character. In some ways the alternative POVs slowed the story down for me.

This was a book I should have finished in a week, and it took me almost two. It was not a story that was in a hurry to unfold which on one hand is great because it gives the reader a chance to savor it, but on the other hand there needed to be a little more drive behind the narrative to move things a long because it did take me a while to get into.

That said there was a lot to like about this book. For one, the Depression as a time period adds a lot of ambiance to the story. I also thought Barrows did a marvelous job describing the region. While I was reading I felt the heat of the summer and the charm of small town America. I could visualize everything about Macedonia and the area. Her descriptions are vivid and completely engage the reader from beginning to end….sometimes it’s a little over the top but I didn’t mind in the least. I loved how she painted the scene for her readers.

I am normally not a fan of ‘small town America’ books but the descriptions in this were great and I also was pleasantly surprised by how much I liked reading about small town politics, dynamics, the family dynamics, and the history of the town.

For me personally, this story fell just short of wonderful. It was good but it didn’t keep me up into the night reading nor was it calling my name from my nightstand at every turn but it wasn’t a bad story either. I would say that it’s a decent casual summer read.

Most of the reviews I have read fell somewhere in the middle. Readers seem to either love it or like it and I would say that I was one of the readers who liked it.

Book: The Truth According to Us by Annie Barrows