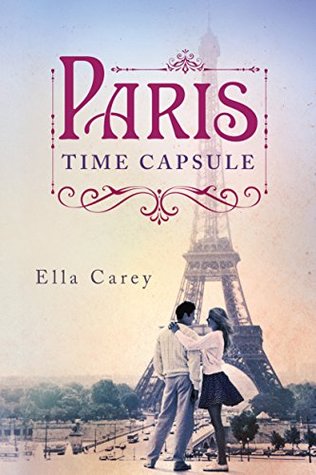 Cat Jordan is about to get the surprise of her life when she opens a mysterious letter from Paris. Cat has been working as a photographer and basically lives a very bohemian lifestyle.

She has a boyfriend, Christian, who she has been with for a while who is much different than she is…..his family is very wealthy and he is very traditional. Basically they are complete opposites but it seems to be working….ish.

Well Cat finally decides to open the mysterious letter, only to find that she has inherited something…..from a woman she has never heard of! Side note, why can’t this sort of thing happen to me?!

Cat calls the lawyer in Paris who has written the letter and he explains that it is indeed true and she is to come to Paris immediately to claim her inheritance. He doesn’t tell her what it is but her letter came with a key so she suspects if must be something of value…..especially if she needs to fly to Paris to claim it.

The next day she is on a flight to Paris where she finds out that she indeed has inherited something substantial…..an apartment. She has no idea why this is happening to her or who this mysterious woman is that has bequeathed the apartment to her but she is at least willing to check out the apartment and see what’s inside. When she arrives at the apartment, she is met by a man, Loic, claiming to be the woman’s family.

That presents a bit of an awkward situation, especially for the French lawyers as the family would have first claim to the apartment but since they didn’t respond, it went to Cat so now here they both claiming the apartment.

Cat and Loic decide to at least enter the apartment at the same time and sort the ownership out later. When they enter the apartment, they find a treasure trove of items….literally! Cat begins to slowly piece the story of how this apartment came to be her’s and all the while trying to ignore her growing attraction to Loic.

This story was whimsical and fun. I loved the idea of a mysterious apartment in romantic Paris full of treasures and history. I absolutely loved the premise of this story! But the storu itself was a little rough and cliche in places. For instance, the bohemian girl and traditional rich guy romance was so cliche….they clearly did not belong together and I flat out couldn’t stand Christian from the start. They were clearly so wrong for each other. Loic on the other hand was dashing and mysterious which I liked…..and their romance was much also cliche but yet fit better. The only thing that bothered me was Loic’s propensity for using Cat’s name excessively in the dialogue.

That for me was the biggest issue of the novel….some of the dialogue was a little rough and needed some polishing. I found some of the dialogue tedious and basically just thick with unnecessary things like the over use of Cat’s name by Loic as an example. It just didn’t flow well for me.

I also struggled with Cat’s sense of denial about her relationship with Christian. Over all it was evident that she was fighting a losing battle and allowing him to just take over her life…..she was so passive about it all that I just found her self talk and rational frustrating.

There were aspects of this novel that I really liked such as the premise, but the dialogue needed some polishing, and I think that Cat could have been stronger and grown more substantially throughout the story. Overall there were fun things about this book that I really really liked and with some editing and refining it would be such a good story. For some reason I just got hung up on the dialogue which made me sad because I think the story would have flowed better with better dialogue.