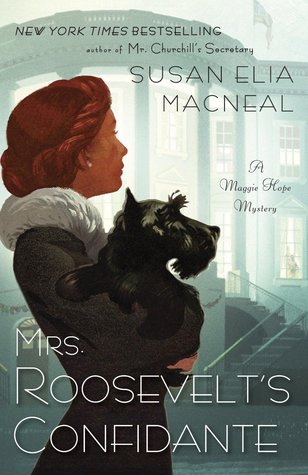 Maggie Hope has just landed state side after being in England for quite some time. She has come with Prime Minister Churchill and the rest of his cabinet to meet with President Roosevelt weeks after the attack on Pearl Harbor.

The two world leaders plan on presenting a unified front to the world as allies in the wars against Germany and the Japanese but their relationship is tedious. Any little scandal could threaten to undo their diplomatic relationship.

And the murder of a White House aide qualifies as a scandal!

Mrs Roosevelt’s secretary, Blanche, failed to show up for work and Mrs Roosevelt herself insists on checking up on her. She takes Maggie along with her, and when they arrive at Blanche’s apartment, she is already dead. It appears that she committed suicide but as the story unfolds, murder appears to be more likely. They also discover a rubbing of a note that incriminates the First Lady in a scandal….but the original note is missing.

Maggie plans on protecting the First Lady and solving the murder before the note gets leaked to the press and over turns the diplomatic relations between the two nations.

I have been a huge fan of Maggie Hope over the years. At times her character went in directions that I didn’t care for or maybe she made choices that I thought were questionable but at the end of the day, those choices and directions made her seem more real and relateable which I loved.

I felt like Maggie was finally coming to terms with some of the things she had to endure through the war and as a spy. It’s like she has accepted her choices and learned to live with the choices she has made. She is no longer the Maggie of the earlier books….she’s more mature, more worldly, and more her own woman than in the first book. In this book I really felt like we got to see a ‘new’ Maggie….not completely different from her original character but yet changed by life events. I love seeing this kind of character evolution.

In the previous book, one of the things I noted was I wished that Maggie and John would just get on the same page already or just move on. I had hoped that in this book they would finally come together and work things out but at the same time it was pretty apparent that they were both so changed by the war that their relationship was just not going to work. In lots of ways this made me sad because I really felt like there was genuine love there in earlier books. But at the same time their life experiences had been so drastic and life altering that I also felt like their relationship was impossible and beyond repair.

Originally I was apprehensive about this book moving things back over to America. I love the whole American in Britain thing and I just wasn’t ready for the story to move over to the states but at the same time I think it worked well to have Maggie address some of her feelings of ‘identity’…..where does she belong? Is she a Brit? Is she an American? Where does she belong? I think this book kind of helped answer those things for me as a reader. Now she is heading back to England and her relationship with John is now more clear….I just have this feeling that the next book is going to be really really good.

The only thing that kept me from giving this book a 5 star rating was the mystery part. For me this book was more about John and Maggie and Maggie finding her ‘place’ in her life now, not to mention how things were shaping up with the war. For me there wasn’t really much of a ‘mystery’. It was pretty clear that Blanche was murdered and the reason so for me there just wasn’t enough of the ‘mystery’ to hold my interest. I was much more into what was happening between Maggie and John than the mystery itself.

Overall this was another solid hit for MacNeal. Lots of history and lots of foundation laying for future books and plots. I like the direction that Maggie and the other characters are moving and I am excited to see what’s in store next for my favorite red haired spy!

Ok guys this cover couldn’t be more eye catching if it tried! I am so happy to be part of the cover reveal for BLOOMSBURY GIRLS by @authornataliejenner I can’t wait to read this one! Here is a bit about the book:
Hello bookstagram friends! I know it’s been a hot minute since I’ve been on here but I promise once school gets going I’ll be back on more frequently. So today I just wanted to pop on and share this once in a blue moon 🌚 tea from @adagioteas available for today only: Limited Edition Bella Luna Blue Tea. A customer favorite and magical tea that brews blue, and when you add lemon juice, it turns purple! It is an exclusive that they are only selling on days of a blue moon. The next one is on August 22nd!
“Taut, sexy, and dripping with old Hollywood glamour,
Happy #stacksunday friends! I hope you are having a fun filled bookish weekend! I started a new book last night and can’t put it down! So excited to share with you guys!