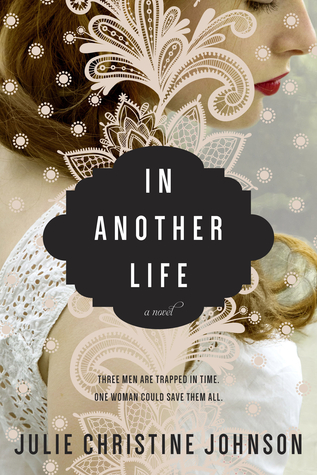 Historian Lia Carrer has finally returned to southern France, determined to rebuild her life after the death of her husband.

But instead of finding solace in the region’s quiet hills and medieval ruins, she falls in love with Raoul, a man whose very existence challenges everything she knows about life–and about her husband’s death.

As Raoul reveals the story of his past to Lia, she becomes entangled in the echoes of an ancient murder, resulting in a haunting and suspenseful journey that reminds Lia that the dead may not be as far from us as we think.

Steeped in the rich history and romantic landscape of rural France, In Another Life is a story of love that conquers time and the lost loves that haunt us all.

This story sounded absolutely amazing from the description. A man with a mysterious past, a women grieving, and romance all set in the beautiful south of France……it sounds like a delightful read! And while a lot of it was delightful and delivered, there were parts that were a little rough for me.

Johnson provides the reader with a ton of detail in her writing, and at times it was almost a little too much for my taste. The start of the book was a little slow for me, there was a lot of detail about the character background and set up for the book. At times I felt like I was being told too much in the story rather than discovering it for myself if that makes sense. It just seemed like a lot of the book was slower in parts. Some parts I felt could have been edited way down or cut out to make things go a little quicker.

While this was some what of a dense read for me, I appreciated the amount of research that went in to writing such a complex story. It was evident that Johnson enjoyed the content of her book and put the time into making sure that readers were treated to historical details and accuracy in their reading.

The murder mystery part was really interesting to read about. It’s based on a real murder and the Cathartic crusades and I thought that Johnson had a complete grasp of the Languedoc region of France and the history of this event and was able to convey that to the reader. The descriptions of the cathedrals were beautiful!

As a debut novel, this wasn’t a bad book at all! Johnson has a great way of story telling and creating interesting characters and picking a unique region and historic setting. I would say that cutting out some of the excess will come in time with more writing. I would definitely read more books by her in the future! I enjoyed the characters and story enough to want to see what happened in the end, the thickness of the writing was frustrating because I wanted things to move along more quickly but overall I finished the book feeling good about the writing and the story telling style.

Book: The Witches of Cambridge by Meena van Praag

One thought on “Review: In Another Life by Julie Christine Johnson”

Romance is in the air in this reverse romance novel from @shadowmountainpub I have it on my blog today for review@so come check it out!
Ok guys this series has been so fun even if I skipped book 2 I still loved this one (book 3) in the series and today it’s up on my blog for review so come check it out!
This book right here was one of my most anticipated reads this year and I’m so excited to share my review with you guys today on my blog!
Happy Mother’s Day to all the moms out there. Today I hope you get to relax, get spoiled and get left alone 😂 I know that’s all I want! 😂