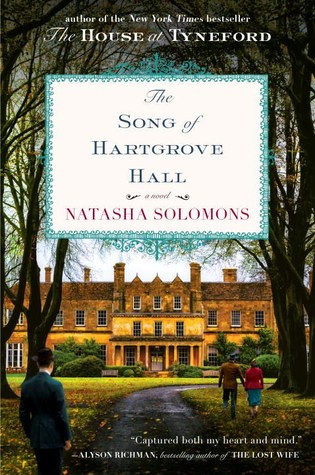 Over the last few years, I have seen Natasha Solomons’ books come up on my recommended reading lists quite a bit.

Her signature style seems to be books about great houses and family scandals set in war time or post war England……sort of reminiscent of Downton Abbey.

The books opens on New Year’s Eve, 1946. Candles flicker, a gramophone scratches out a tune as guests dance and sip champagne— for one night Hartgrove Hall relives better days.

Harry Fox-Talbot and his brothers have returned from the war determined to save their once grand home from ruin. But the arrival of beautiful wartime singer Edie Rose tangles the threads of love and duty, and leads to a devastating betrayal.

Fifty years later, now a celebrated composer, Fox reels from the death of his adored wife, Edie. Until his connection with his four-year old grandson – a piano prodigy – propels him back into life, and ultimately to confront his past. An enthralling novel about love and treachery, joy after grief, and a man forced to ask: is it ever too late to seek forgiveness?

I have a lot of wonderful things to say about Solomons writing. Her prose is breathtaking, beautiful, descriptive, and moving. I felt like I was right there at Hartgove Hall. The descriptions of the house were stunning and elegant, I fell in love with the house much as the brothers did.

I would gladly rave about Solomons writing abilities all day long….she has a wonderful gift for elegant prose that fits within the time period and captures the essence of romance and nostalgia that a book like this needs…..where I struggled the most was with the characters, one in particular.

The love triangle intrigued me quite a bit. It reminded me a little of The Legends of the Fall movie….three brothers fall in love with a beautiful woman already engaged to one of the brothers (likely the least deserving). I was eager to see how this situation all came about and ultimately was resolved plus I love The Legends of the Fall movie and since this sounded similar I was all about it….however, I had trouble connecting with Edie. Throughout the novel I kept waiting and waiting for something to distinguish Edie as a woman worthy of this kind of love triangle…..and it just never happened for me.

I failed to see what the big fuss was with her. Fox told the audience all about her and how he loved her so much but I never really felt like the love was mutual or as ‘breathtaking’ as Fox was making it out to be. I never really connected with Edie and I never felt like she was worthy of the affection all the brothers had for her so that was my biggest issue with the book.

The other thing that was a bit of a struggle was that the book was slow. I was well into the book (55%) before it started picking up. On one hand, I appreciated the time that Solomons spent describing the house and this romantic atmosphere that the story needed but at the same time, it was tedious and it took too long to really get into the story for me which disappointed me. It took me a LONG time to finish this book…..much longer than I expected.

I normally love duel time novels like this, and I thought in this case the duel time worked well at times I felt like the time period switches were ill timed…..for one thing, they were long stretches at a time. I found that by the time we returned to the specified period, I had forgotten a lot of what happened prior to that. So I would have liked to have seen the period switches more frequent.

Over all while I didn’t enjoy this book as much as I had hoped, I am not completely turned off to Solomons as a writer. I still want to read her other books such as The House at Tyneford because her writing style is truly wonderful and I love books about old English country estates and family dramas so her books are totally my type of books, it just so happens this one fell short for me but just because one book wasn’t a knock out for me doesn’t mean I am completely put off to others by the same author. Others might really enjoy this book, but for me I was hoping for more.

Book: The Song of Hartford Hall by Natasha Solomons