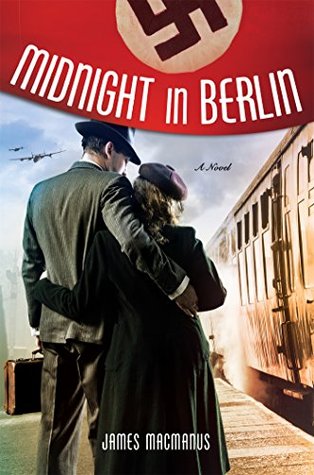 I am a sucker for war romances…..and that’s sort of what I thought I was getting with this book.

While it does have elements of romance, it’s more of a book about the beginning days of WWII and what was going on behind the scenes with diplomatic discussions etc.

Berlin, 1938. Newly-appointed diplomat, Noel Macrae and his wife Primrose arrive at the British Embassy in Berlin.

Prime Minister Chamberlain is intent on placating Nazi Germany, but Macrae is less so.

Convinced Hitler can be stopped by other means than appeasement, he soon discovers he is not the only dissenting voice in the Embassy and finds that some senior officers in the German military are prepared to turn against the Fuhrer.

Gathering vital intelligence, Macrae is drawn to a Nazi bordello and its enigmatic Jewish hostess Sara Sternschein. Sara is a treasure-trove of knowledge about the Nazi hierarchy in a city of lies, spies and secrets.

Does she hold the key to thwarting Hitler or is Macrae just being manipulated by her whilst his wife romantically pursues his most important German military contact, Florian Koenig?

So as I said, there are elements of romance which female readers will enjoy but this is not your typical ‘war romance’…..not even close in my opinion. It read a little more like a spy novel with romance sprinkled throughout.

I was really intrigued by this novel and I really enjoyed reading it. It wasn’t what I was expecting at all but I loved the grit and storytelling style of MacManus immensely! From the very beginning I was hooked into the story. It did take me a little bit to get the main characters sorted out and what they were all about, but overall I was able to navigate the characters just fine.

Because this book was a little more in the ‘spy’ genre for me, it filled a need I was craving lately. I loved discovering new ‘intelligence’ about the plot/characters and I loved that the story was fairly fast paced and had a bit of grit to it. Not so much that it would turn off some readers but enough to make it interesting and well applied throughout the plot.

For those readers who were hoping for a ‘love story’ it’s more of an unlikely love story that has it’s fair share of trails and tribulations and it is kind of an unlikely and unexpected love story which I really enjoyed. However it’s not the focus of the novel which was surprising and enjoyable for me.

I loved the atmospheric-ness of the novel. There was definitely tension in the novel itself due to the setting. I felt like it kept me on my toes and interested in the novel and I was constantly wondering what would happen next.

The attention to historic detail was also impressive. I loved that the story took place directly in Berlin rather than another country or back in England. It made the whole novel more dark and built the tension even move. I loved this book.

There were a few times when I was wanting a little more romance in the book, but as I said before I didn’t mind that it wasn’t the focus. There were plenty of other aspects of the novel that kept me interested and reading.