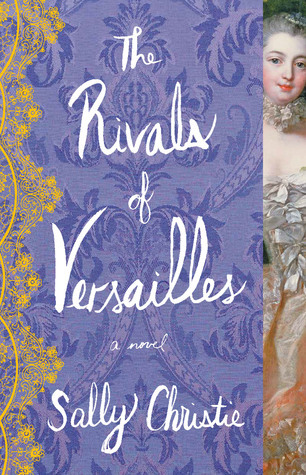 The first book in this series, The Sisters of Versailles, hooked me. Five sisters, four of which were all mistresses to the same king? Sounds intriguing right?!

So when this one came up for review I was excited because Christie adds such wonderful, rich historic detail to her story that I was eager for more in this installment.

This book is less about the Nesle sisters and more about the infamous Marquise de Pompadour.

The year is 1745. Marie-Anne, the youngest of the infamous Nesle sisters and King Louis XV’s most beloved mistress, is gone, making room for the next Royal Favorite.

Enter Jeanne-Antoinette Poisson, a stunningly beautiful girl from the middle classes. Fifteen years prior, a fortune teller had mapped out young Jeanne’s destiny: she would become the lover of a king and the most powerful woman in the land.

All too soon, conniving politicians and hopeful beauties seek to replace the bourgeois interloper with a more suitable mistress. As Jeanne, now the Marquise de Pompadour, takes on her many rivals, including a lustful lady-in-waiting, a precocious fourteen-year-old prostitute, and even a cousin of the notorious Nesle sisters.

She helps the king give himself over to a life of luxury and depravity. Around them, war rages, discontent grows, and France inches ever closer to the Revolution.

This story is mostly told from the Jeanne’s perspective (AKA Reinette) so the reader gets to know her and her story rather intimately. There are a few other characters who narrate but she is the primary.

From a very young age she is told she will be the king’s mistress and when the time comes, she welcomes her hate. Though many in the court try to squash her power and influence, she remains the King’s Favorite. With each new rival, I was more and more intrigued to see how and if she was going to hold on to her influence. Extremely well written!

Madam de Pompadour is one of King Louie XV’s most well known mistresses and is widely remembered in history so obviously there must be an interesting story behind their relationship etc. I’ve read a few non fiction books that talk about their relationship over the years but none of the books made their story as ‘real’, sexy, and yet modern.

Because of Christie’s story telling is rich in historic detail but yet has a very modern flair which keeps audiences engaged. While this is historical ‘fiction’ I am sure she took some liberties in the story itself  when necessary and the language etc but the overall story between King Louie and Madam de Pompadour I thought was pretty historically accurate.

The only thing I wished was that I had gotten to know Jeanne before she became the mistress a little more. So much of the book was based on her relationship with the King and I just found myself wanting to know more about her before court changed her and she became so influential.

I am eager to see where the next book in the series take us!

Sunday, May 1
Review at A Book Drunkard
Spotlight & Giveaway at Passages to the Past

Wednesday, May 4
Review at To Read or Not to Read
Review at With Her Nose Stuck In A Book

Thursday, May 5
Review at Bookish

Wednesday, May 11
Review at Oh, for the Hook of a Book!
Review, Guest Post, & Giveaway at History Undressed

Thursday, May 12
Review at The Lit Bitch
Review at History From a Woman’s Perspective
Interview at Oh, for the Hook of a Book!

Friday, May 13
Review at #redhead.with.book
Interview at The Maiden’s Court