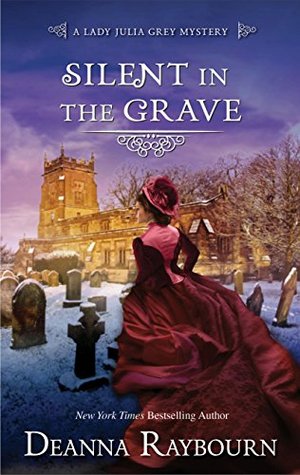 Lady Julia’s husband has literally just dropped dead in the middle of her dinner party.

After being in failing health for most of their marriage, Lady Julia knows he isn’t long for this world but she is shocked when the impertinent Nicolas Brisbane suggests that it might have been foul play.

Brisbane is a private investigator who was hired by Lady Julia’s husband because he believed someone wanted him dead. Brisbane plans on continuing the investigation if Lady Julia would like….but she is reluctant to believe him and dismisses him after the funeral.

A year later, a chance discovery changes her mind and she reaches out to Brisbane for help in solving the crime. Reluctantly he agrees and they begin and unconventional investigation which takes then into a number of alternative lifestyles to try and flush out the murderer.

But somewhere in between their investigating and power struggling, a flicker of attraction sparks between the two and Lady Julie begins to wonder if there could be more to their relationship than just a dead body or two.

I have read a couple of books by Raybourn and loved them all, especially her latest heroine Veronica Speedwell. So as I anxiously wait the arrival of my baby (and Raybourn’s next Speedwell book), I thought I would pick up one of her most famous heroines and check out the Lady Julia books!

Not going to lie, this is a hard book for me to review. On one hand, I loved it and on the other I didn’t love it as much as I loved the first Veronica Speedwell book.

Raybourn is very good at building anticipation when it comes to the romantic aspects of her mysteries. In many historical mysteries, the heroine meets the inspector and they fall madly in love in the first book and then that’s that. They are married and solve crimes together of umpteen books. With Raybourn, she creates more of a build up, typically with the heroine meeting said man/partner in crime and while there is chemistry, there isn’t the finality of a ‘relationship’ by the end of the first book. I really like that about her stories and that’s exactly how this book played out……creating tension between Lady Julie and Brisbane.

For me personally, I didn’t feel like there was enough romantic tension created between the two. Raybourn is so good at creating sexual tension as in the Veronica book, but in this one I simply felt like there wasn’t the same connection between Lady Julia and Brisbane that I had hoped. Though I like them well enough together, I am just not completely invested in their relationship.

I like Julia as a main character and I liked that she’s rather unconventional in Victorian England…..same with her family. I love that they are non conventional and frankly a little strange however at times I found myself questioning the likelihood of these characters within the period itself….they didn’t seem to fit at all with the time period. But at the end of the day I was willing to let that go and simply enjoy the characters for what they were and not try and over analyze their relation to the period.

The mystery itself wasn’t overly complicated and I loved at the darker direction the mystery took….racy and intriguing! I loved how Raybourn incorporated the darker side of London society into the mystery and it made for a very satisfying conclusion.

So while I accepted the characters, loved Lady Julia as a heroine, and liked the direction of the mystery, I simply felt a little short changed by the Brisbane and Lady Julia romance element which caused me to give this book a bit of a lower rating. Like I said, on one hand I loved it and read it extremely quickly because it held my attention and I was invested in the story but on the other hand I finished it wanting more chemistry or spark between Brisbane and Julia.

I did immediately download the second book in the series and hope to finish it before the baby comes! The reason I felt compelled to read the next one is because I know that Raybourn is more than capable of creating characters with major sexual tension and building audience anticipation as well and just because it didn’t happen with the first book, doesn’t mean it won’t happen with the second! So here I am reading the second book just as soon as I finished the first…..so far I am feeling more of a connection between Julia and Brisbane so we shall see where things go!

7 thoughts on “Review: Silent in the Grace (Lady Julia Grey #1) by Deanna Raybourn”