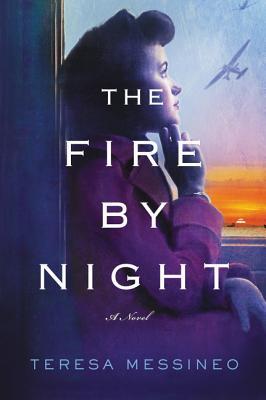 2017 has started off as a very good year for me when it comes to reading choices! This book, THE FIRE BY NIGHT, sounded so full of potential and interesting that I couldn’t pass it up.

This is the story of two nurses who meet during WWII.

In war-torn France, Jo McMahon, an Italian-Irish girl from the tenements of Brooklyn, tends to six seriously wounded soldiers in a makeshift medical unit.

Enemy bombs have destroyed her hospital convoy, and now Jo single-handedly struggles to keep her patients and herself alive in a cramped and freezing tent close to German troops.

There is a growing tenderness between her and one of her patients, a Scottish officer, but Jo’s heart is seared by the pain of all she has lost and seen. Nearing her breaking point, she fights to hold on to joyful memories of the past, especially the times she spent with her best friend, Kay.

Half a world away in the Pacific, Kay is trapped in a squalid Japanese POW camp in Manila. Far from the familiar safety of the small Pennsylvania coal town of her childhood, Kay clings to memories of her happy days posted in Hawaii, and the handsome flyer who swept her off her feet in the weeks before Pearl Harbor.

Surrounded by cruelty and death, Kay battles to maintain her sanity and save lives as best she can . . . and live to see her beloved friend Jo once more.

This was story of friendship, valor, sacrifice, and survival and one that will likely stay with readers long after they are finished.

I was surprised at how easy it was to like the main characters. I worried I would like one more than the other but I found myself equally captivated by each one and invested in each of their stories. One of the things that drew me to this book was the fact that both women were war time nurses. I did my master’s thesis on women in Civil War nursing so war time nurses and their stories always hold a place in my heart. So when this one came across my desk for review, I was more than happy to review it.

This book is Messineo’s debut novel and it’s an impressive first novel. Not only was the content well researched, but the emotion on each page was so well done and beautiful. The reader will find it hard to not become invested in the characters and their stories. One thing that I thought set this novel apart from some of the other books I’ve read about women in WWII was that it focused on some of the ‘real issues’ that are sometimes left out of the female narrative, like shell shock and PTSD. I think it’s important to remember that soldiers weren’t the only ones suffering from PTSD, but the women, such as nurses on the front lines, were just as susceptible.

Messineo did a great job at showing the emotional side effects of war when it came to the characters and I applaud her for her ability to solicit such an emotional reaction from her readers.

I will say that I liked this book more than I expected to. I guess I expected something a little less intense but when I started the book I was drawn in by the story and before I knew it, I couldn’t put it down. It’s a beautifully written novel and sure to please readers who love war time stories about friendship, perseverance, and survival.

Book: The Fire by Night by Teresa Messineo