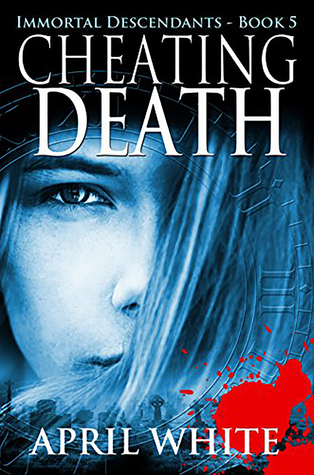 So here with are with another beloved series coming to an end. I have mixed emotions….I am sad that a series that I have adored for the last few years is coming to an end but happy because it wrapped up in such a wonderfully fitting way that I couldn’t help but be satisfied.

An explosion has split Time and Archer has paid the ultimate price, leaving Saira heartbroken and desperate to repair the rupture. But the blast has trapped Saira in an alternate future where Mongers are cornered predators and Death is the ultimate judge.

If Saira and her larcenous friend Ringo ever want to see Archer alive, they must pull off the impossible – alter history at a moment in time to which they cannot return. But saving Archer will restore a timeline where Mongers have complete control, mixed bloods are hunted prey, and the Descendant world is spiraling into chaos.

As Saira uses her Clocking skills to prevent her worst nightmares from coming true, she travels from the dirty streets of Victorian London to the secret archives of the Vatican.

She seeks a purpose that is greater than smashed hope, greater than lost love, greater than the prophecy that has shaped her very existence. She must use the lessons of history to free the present and shape the future. And in the end, Saira and her friends will face War and Death in the most important battle of all – the one for Peace.

One thing that stood out to me in this book was not going over old history. I suppose the author feels that if you made it to this book then you probably know the story and thus no need to rehash ancient history which I totally appreciated! However, I had forgotten little pieces of details from the last book so it took me a little bit to ‘remember’ where things were at in regards to some of the story lines.

This book had a much faster pace than some of the others. I was anxious to see if Archer was still alive and what the final outcome would be with the impending war. The Immortal world is so engaging and interesting. White has created a world full of interesting characters, strong female leads, and a rich fantasy world that could continue to be drawn upon. Though this is the last book in this series, I still felt like there was enough ‘meat’ in the Immortal world to write other stories set in the same realm. I would love to see a book set in the Immortal world with Ringo as the main character. Ringo wasn’t my favorite character in the series to begin with but as the books have progressed….he has grown on me so now I would love to see a book about him.

Saria is an incredible main character too. She isn’t one of those leading ladies that ‘finds herself’ in the series……she already is so strong and knows who she is to begin with but as the book progresses she continues to build on those traits to become this great leading lady that many readers could admire. I love that the whole series isn’t about her’finding herself’ like so many of the YA novels are or romance….it’s more about how she deals with adverse situations and how she continues to grow and mature into a young lady. I love that about her and this series shows how she thrives as an independent woman in various different time periods.

One of the things that sets White apart from her peers is her ability to research her novels. Because each book has a time travel element, her ability to research multiple different time periods and write about them with such confidence and knowledge is pretty incredible. Sometimes authors have more historic knowledge about one period or another but for White……her historical knowledge period to period is phenomenal! I am impressed with her knowledge and attention to detail with each book! It’s clear that she does her research before sending her characters into a new ‘world’ or ‘time’.

On the whole this was a great read. Nothing was stagnant or slow in the book and the way everything wrapped up was brilliant. I loved it but I’m sad now that it’s over!