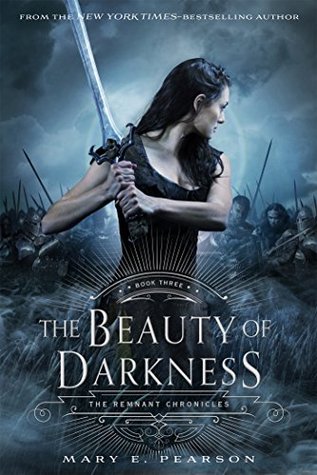 I had this book on pre-order for quite some time….it just so happened that it was released when I was in labor so I missed out on starting it right away.

In all the craziness that comes with a baby and other reviews, this book kind of got buried in my to be read list and then one day I remembered that I had it and was super excited to start reading it.

I loved the first two books and was eager to see what the conclusion would be like since the last book left things really up in the air and ended on a climatic note.

Lia has survived Venda—but so has a great evil bent on the destruction of Morrighan. And only Lia can stop it.

With war on the horizon, Lia has no choice but to assume her role as First Daughter, as soldier—as leader. While she struggles to reach Morrighan and warn them, she finds herself at cross-purposes with Rafe and suspicious of Kaden, who has hunted her down.

In this conclusion to the Remnant Chronicles trilogy, traitors must be rooted out, sacrifices must be made, and impossible odds must be overcome as the future of every kingdom hangs in the balance.

So this book was a hard one for me to review. On the whole, I love the series and the first book was so wonderful but this last installment really fell short for me. I felt really disappointed with parts of this one.

The first thing that rubbed was it took too long for the battle to come and when it did, the battle itself went too fast. I felt like there was so much build up and talk about what was going to happen when Lia finally met the Venda army in the field and what strategies were going to be deployed and then after 90% of the book, they FINALLY met on the field. Within a couple of pages it was over. I felt like there was too much build up and not enough of a crescendo to justify the lengthy build up.

One of the things I loved most about this series was the love ‘triangle’. While it wasn’t overly angst-y like some YA novels and though it was clear that Lia and Rafe were in love, the question of Kaden’s feelings were left unresolved to me. Though Kaden has his own ‘happily ever after’ which fit perfectly, I still felt like his feelings for Lia were left mostly unaddressed. Without giving away too many details, there was a scene where Kaden asked Lia if she still loved Rafe and when she confirms her feelings, Kaden acknowledges and then that’s it. It seemed like he just accepted it and moved on and that kind of bothered me because in the first two books it was evident that he had strong feelings for Lia and perhaps she could reciprocate those feelings under the right circumstances. To leave things how they were between Lia and Kaden seemed almost like the author wasn’t sure what to do with their relationship.

What I did like though was the tension between Lia and Rafe. I loved watching the conflict between love and duty unfold between them. I thought that scenario had a lot of truth to it and added a lot to the love story. I could easily sympathize with both of them and could feel how much they wanted to be together but also do their duty to their kingdoms. This aspect of the novel was really well written and I loved watching it play out.

As I said, this is a hard one for me to review….on the whole, the series is great but the last book just feel short for me. Overall I would give the series itself a B- rating, even if this book wasn’t the best in the series. It did wrap things up in a satisfactory way, not maybe as neatly as I had hoped but all story lines came full circle.

Book: The Beauty of Darkness (The Remnant Chronicles #3) by Mary E Pearson

I wondered at the way we all change, all the outside forces that press and mold and push us into people and things we hadn’t planned to be. Maybe it happened so gradually that by the time we noticed, it was too late.

If there was one thing I had learned, it was that time could twist and shred truth like a forgotten sheet battered in the wind.

Love didn’t end all at once, no matter how much you needed it to or how inconvenient it was.