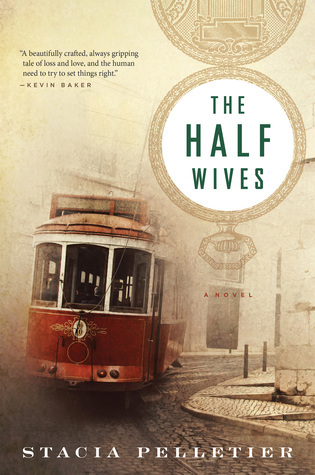 The first thing that caught my eye about this novel, was it was story told in one day–May 22 1897. In my mind I was thinking, how is this going to work out? One day? Will this even hold my interest or would there be enough content in that one day to keep me interested?

Because this sounded like a challenge, I agreed to review it even if it sounded a little on the odd side.

Over the course of one momentous day, two women who have built their lives around the same man find themselves moving toward an inevitable reckoning.

Former Lutheran minister Henry Plageman is a master secret keeper and a man wracked by grief. He and his wife, Marilyn, tragically lost their young son, Jack, many years ago. But he now has another child—a daughter, eight-year-old Blue—with Lucy, the woman he fell in love with after his marriage collapsed.

The Half Wives follows these interconnected characters on May 22, 1897, the anniversary of Jack’s birth. Marilyn distracts herself with charity work at an orphanage. Henry needs to wrangle his way out of the police station, where he has spent the night for disorderly conduct.

Lucy must rescue and rein in the intrepid Blue, who has fallen in a saltwater well. But before long, these four  will all be drawn on this day to the same destination: to the city cemetery on the outskirts of San Francisco, to the grave that means so much to all of them. The collision of lives and secrets that follows will leave no one unaltered  (summary from Goodreads).

I’ll be honest, I am a sucker for a good love triangle. I know a lot of people tend to shy away from them but for me–if they are done well–I really enjoy them. In this case I felt like the love triangle was well done. Often it’s two men in love with the same woman, but in this case it was a man in love with two women and I really really liked that perspective.

I also liked how the whole one day story approach turned out. It wasn’t what I expected at all but in a good way, and it worked–that’s all I will say about that since I don’t want to give too much away.

While this book had a lot of things that I enjoyed, I couldn’t give this one a higher review than 3 stars and here is why–the story telling style. The book used dashes in place of quotes and the three character perspectives used a lot of different pronouns which I found horribly distracting. I had problems understanding who was talking and it really slowed things down for me. In my mind, this was a risky approach to the novel and while some might enjoy this kind of ‘shake up’ in writing, I personally wasn’t a fan. I found myself getting frustrated with the reading…..not with the story itself but with the mechanics.

The story itself was really good, especially the ending. This was one that stayed with me for a few days. It’s a great story about grief, love, and loss. Though the approach was not what I would have gone with, it was a readable story. For those who have the patience to muddle through the pronouns and some of the technical problems, you will be rewarded with a unique story.

Book: The Half Wives by Stacia Pelletier