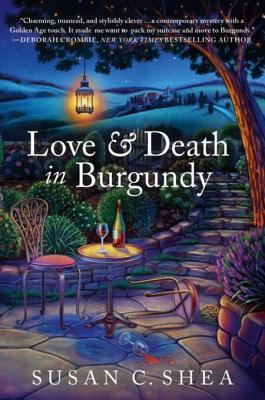 How many amateur detective novels have you read that are set in a quaint English village? Tons, am I right? Now don’t get me wrong, I love my English village mysteries but sometimes it’s nice to have a change of scenery.

The French country side is the perfect setting for this mystery. When I think of France all I think of is Paris, but there is a whole other beautiful countryside that often gets overshadowed by the lights of Paris. I loved how this story brought life to the French countryside. I am ready to buy a little chateau in the country and drink wine…..now if only there was a murder to solve.

After three years of living in the small town of Reigny-sur-Canne, all Katherine Goff really wants is to be accepted by her neighbors into their little community. But as an American expat living in the proud region of Burgundy, that is no easy task.

When the elderly Frenchman who lives in the village chateau is found dead at the bottom of a staircase, the town is turned into a hot bed of gossip and suspicion, and Katherine suddenly finds herself drawn deeper and deeper into the small town s secrets.

A motherless teenager, a malicious French widow, a brash music producer, and a would-be Agatha Christie are among those caught up in a storm that threatens to turn Katherine s quiet life upside down. As more and more of the villagers’ secrets are brought to light, Katherine must try to figure out who, if anyone, in the town she can trust, and which one of her neighbors just might be a killer.

This novel wasn’t earth shattering, nor was it a thriller by any definition but it was still an entertaining read! I wasn’t really sure what to expect…..I guess in my mind, I thought this would be more of a cozy mystery with cats and wine, but it wasn’t. Sure it had elements of a cozy mystery but I felt like it was more sophisticated than that in my opinion.

I liked Katherine for the most part, she reminded me of Agatha Raisin for some reason…..she wants to fit in with her villagers but just can’t no matter how hard she tries, maybe that’s why she reminded me of Agatha Raisin. Anyway, Katherine and her husband have this bohemian feel about them which I liked. The only thing that I didn’t care too much for was at times Katherine could be really self centered but for the most part I wasn’t completely put off by her and liked her. The story is just as much about her attempts to fit in as it is a murder mystery which is a nice balance.

There are two narrators/POVs which I personally didn’t care for. The first POV is Katherine, but the second is the village thief’s daughter, fifteen year old Jeannette. Through Jeannette the audience gets a better idea of what really goes on in the village and the secrets the residents try to keep. I suppose Jeannette’s POV is necessary in that regard but for me, I guess I just expected the bulk of the mystery to be from Katherine’s perspective.

The mystery was well thought out and concluded appropriately. I didn’t feel like there were any loose ends and I felt that all the lingering questions I had were answered. I was generally satisfied with the entire book, but for some reason I wasn’t wholly captivated. It was good and well written but there was some rustle that was lacking in my opinion but I just can’t quite put my finger on what exactly.

The novel has a lot of atmospheric elements and the setting alone recommends this book. It has a lot of  humor and gossipy villagers with an interesting mystery and likable protagonist but I just felt like it lacked some polish to make it a GREAT read. I would recommend this book to fans of cozy mysteries but if you are looking for a ‘thriller’, I would look elsewhere.

Book: Love and Death in Burgundy by Susan C Shea