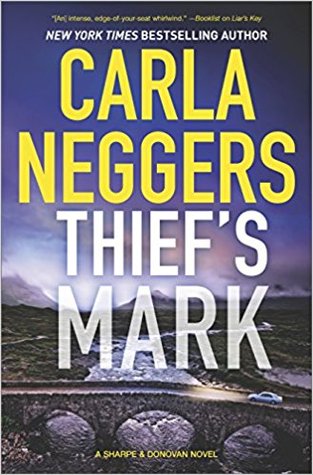 With fall coming up, I am starting to move into mystery mode. There is something about the turning of the leave and the colder nights that just screams ‘read a mystery’. So as we go into fall, I thought it would share and except from the upcoming mystery, THIEF’S MARK by Carla Neggers.

As a young boy, Oliver York witnessed the murder of his wealthy parents in their London apartment. The killers kidnapped him and held him in an isolated Scottish ruin, but he escaped, thwarting their plans for ransom. Now, after thirty years on the run, one of the two men Oliver identified as his tormentors may have surfaced.

Emma Sharpe and Colin Donovan are enjoying the final day of their Irish honeymoon when a break-in at the home of Emma’s grandfather, private art detective Wendell Sharpe, points to Oliver. The Sharpes have a complicated relationship with the likable, reclusive Englishman, an expert in Celtic mythology and international art thief who taunted Wendell for years. Emma and Colin postpone meetings in London with their elite FBI team and head straight to Oliver. But when they arrive at York’s country home, a man is dead and Oliver has vanished.

As the danger mounts, new questions arise about Oliver’s account of his boyhood trauma. Do Emma and Colin dare trust him? With the trail leading beyond Oliver’s small village to Ireland, Scotland and their own turf in the US, the stakes are high, and Emma and Colin must unravel the decades-old tangle of secrets and lies before a killer strikes again (summary from Goodreads).

Nigel was the older of Ruthie’s two adult sons, a mechanic who often worked on the equipment at the York farm. Lately he was helping renovate a traditional stone-and-timber cottage on the Kershaw farm. It predated the farmhouse. At one point, Posey had considered it for her home, but Henrietta doubted that thought had lasted long. The low ceilings alone would have done in Posey. The cottage was located just down the stone wall, amid trees that bordered a stream and a field, green with spring grass. Cassie’s parents planned to retire later in the year and move into the renovated cottage.

“Ruthie did well today,” Henrietta said. “She’s old-fashioned, dedicated, a thorn in Martin’s side and part of the furnishings as far as Oliver’s concerned, but she’s reliable. I appreciate her—I promise you I do—but if I ever get as proprietary about gardens as she does about muddy footprints and spots on water glasses, I expect you to elbow me in the ribs.”

Cassie nodded warmly, some color returning to her cheeks. “Consider it done.”

“I’m sure it wasn’t. You’re gaining quite a reputation throughout the Cotswolds, you know.”

“A reputation for what?”

“Garden design and a cheerful demeanor.”

Henrietta sighed. “A cheerful Henrietta Balfour. That would shock some people.”

“Life among flowers and winding paths will do that even to a jaded Londoner like yourself.” Cassie paused, studying her friend. They’d known each other for almost a decade but they’d never really spent much time together. “I’m glad you found a career that suits you, but you don’t fool me, Henrietta. You’re bored. The pace of a garden designer and a Cotswold life is different from what you were used to in London.”

And more so than Cassie knew or likely would ever know, but Henrietta couldn’t explain she’d entered Her Majesty’s Security Service fresh out of university, trained and worked as an operator in the field, specializing in surveillance, and then moved up the ranks to an office in Thames House. There’d never been any job in a London financial office. She was happy not to explain, either. Best to put those years behind her.

“I’m a Balfour, Cassie. Gardening’s in the blood.” So was MI5, but Henrietta kept that point to herself. “Bored or not, I could do without what happened today. My only interest at the York farm involves annuals, perennials, herbaceous borders—”

“You can stop there,” Cassie said with a welcome laugh. “I definitely do not have the Balfour gardening gene. Eugene and I are amazed at the landscaping here, though. It’s perfect for us to build on. People say your grandfather puttered in the flowerbeds after he left MI5, right up until his death. That’s heartening somehow. He’d have been proud of you today, don’t you think?”

The lighthearted moment dissipated and Cassie turned serious again. “And Oliver York? Did he really take off?”

“I only saw him at the dovecote,” Henrietta said. “He left a short while before Martin and I found the body.”

“Just awful. Truly. Eugene and I ran into Oliver at the pub last week. He was on his own but he sat at the bar and chatted with people. He doesn’t mingle often. We tend to notice when he does. He’s quite the character, isn’t he? Good-looking and a bit mysterious.”

Henrietta pushed up her sleeves, hiding the blood. “I haven’t really thought about it,” she said casually.

“Haven’t you?” Cassie reached for her gloves. “You don’t have to answer. It’ll keep. This isn’t the time to discuss such things. I know you’re intrepid and all that, but finding a dead man must be a shock. Do you have any idea what happened…how this man died? It had to be an accident, however terrible, don’t you think? He didn’t attack Oliver, did he? Oliver didn’t kill him in self-defense?”

“I don’t know any more than you do, Cassie. The police told me best to leave the investigation to them and get back to my plans for the day.”

Cassie stared at the worn gloves, bits of compost debris and dirt stuck to the fingers. “Can you at least tell me if they suspect murder? I have two small boys…”

“The police haven’t said and I have no idea.”

“I’ve been trying not to freak out. Eugene says even if it was murder, it’s got nothing to do with us. We aren’t targets. We always keep an eye on the boys. Still, I’m keeping them close to home until we hear more. My parents don’t know yet. They’re so looking forward to retiring to the peaceful Cotswolds. If this man’s death was murder…” Cassie shook her head. “No. I’m not going to think that way. It’s a York thing, whatever it is, and nothing to do with us.” She frowned, cocking her head to one side. “Are you sure you’re all right, Henrietta? How can you be so calm?”

“Yes. I imagine so. Be careful, won’t you? And come to dinner tonight. You won’t want to be alone.”

Actually, Henrietta did want to be alone. She couldn’t imagine being sociable after today, but Cassie and Eugene loved to entertain. Henrietta had managed to have them over for wine and olives on the terrace one evening but had whisked them to the pub for dinner. She knew how to cook. She just didn’t like to.

“Don’t forget we can provide you all the compost you can use,” Cassie said, then sputtered into laughter. “For gardens, I mean, not for dinner.”

Henrietta managed a smile. “Thank you.”

Cassie grabbed her garden gloves. “I found a painting in the cottage the other day. It was tucked in the back of a small closet that I doubt had been opened in years. I’ve been meaning to ask you about it. I’ll show you at dinner. It’ll be a pleasant diversion after this morning.”

Henrietta was in no hurry to return to the York farm and chat with the FBI. “Why don’t I take a look now?”