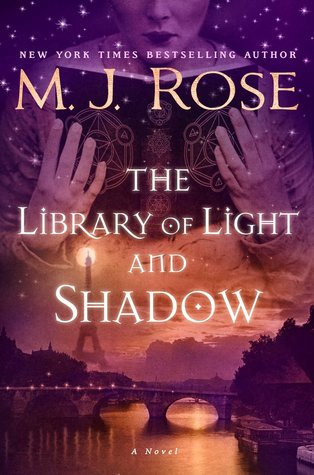 MJ Rose has a talent for writing romantic, magical, and passionate historical fiction novels. I love her Daughters of La Lune series even if at times, the books didn’t end on a high note, overall they are really fun to read and have progressively improved between book I and book II.

I was super excited to see this one come up for review, ironically I had just been wondering when the next Rose book was due out and I was thrilled to see that it was this one!  Her writing style is sensual and lyrical and the story is almost always a promising romance, so you can’t go wrong with one of her books!

In the wake of a dark and brutal World War, the glitz and glamour of 1925 Manhattan shine like a beacon for the high society set, which is desperate to keep their gaze firmly fixed to the future.

But Delphine Duplessi sees more than most. At a time in her career when she could easily be unknown and penniless, like so many of her classmates from L’École de Beaux Arts, in America she has gained notoriety for her stunning “shadow portraits” that frequently expose her subjects’ most scandalous secrets—for better or for worse.

Most nights Delphine doesn’t mind that her gift has become mere entertainment—a party trick—for the fashionable crowd. Though her ancestor La Lune, the legendary sixteenth-century courtesan and—like Delphine—a witch, might have thought differently.

Then, on a snowy night in February, in a penthouse high above Fifth Avenue, Delphine’s mystical talent leads to a tragedy between two brothers. Horrified, she renounces her gift.

Devastated and disconsolate, Delphine returns to her old life in the south of France where Picasso, Matisse, and the Fitzgeralds are summering. There, Delphine is thrust into recapturing the past. First by her charismatic twin brother and business manager Sebastian in his attempts to cajole her back to work and into co-dependence, then by the world famous opera singer Emma Calvé, who is obsessed with the centuries-old Book of Abraham, written by the fourteenth-century alchemist Nicolas Flamel. And finally by her ex-lover Mathieu, who is determined to lure her back into his arms, unaware of the danger that had led Delphine to flee Paris for New York five years before.

Trapped in an ancient chateau where hidden knowledge lurks in the shadows, Delphine questions and in many ways rejects what and who she loves the most—her art, her magick, her family, her brother, and Mathieu—as she tries to finally accept them as the gifts they are and to shed her fear of loving and living with her eyes wide open (summary from Goodreads).

The one question I am asked the most by readers, always has to do with series books. I read a lot of series books and sometimes not always in order. Readers always want to know if they need to start with the first book, 99.9% of the time I highly recommend it, however with this series, I would say that you could probably start anywhere in the series and be ok. That said, it is nice to be familiar with the premiss of the series, but in this case it isn’t required.

Admittedly, the first book fell short for me at the end, however the second book kicked it up a notch and finally with this latest installment, I will have to admit, I think it’s my favorite in the series. There were a few bumps in the story but on the whole it was enjoyable and an intriguing romance that held me interest from the beginning.

I loved how Rose incorporated gothic elements as well as supernatural along with the romance and magic. It was truly a wonderful mixture of so many intriguing bits of different genres.

The reason this one only had a 4 star rating instead of a 5 was for similar reasons as the other books…..the ending fell short for me. Rose does such a great job at building sensual romances and mysterious plots that hooks readers in and makes them enjoy the book, but the ending always seems to lack a certain punch that readers were expecting.

For me, based on her caliber of writing, I would expect an ending that delivered but I just don’t see that happening in the way that I hope with each of her books, and it’s not just this series—her other books lack a certain ‘umph’ when it comes to the ending. This seems to be an issue in her writing which frustrates me as a reader, however I love her books because the foundation is elegant and the chemistry between the characters is solid and believable.

That’s why I keep reading her books and this one was no different. The romance and chemistry between the characters is enchanting and I love how their magical abilities drive the story, however I just wish the ending had matched the build up of the book.

Book: The Library of Light and Shadow (Daughters of La Lune #3) by M.J. Rose